The world of Mark

North America at the end of the Eighteenth century during the War of Independence. A civil war with reprisals and episodes of sabotage. 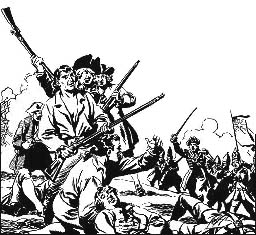 Another reason for the success of this cartoon series undoubtedly lies in the plots of the stories, so rich in action and mystery, so swift and full of interesting hints and tricks. And Mark's adventures also undoubtedly have special features of their own, such as the main theme of many episodes, espionage, which is inevitably connected with the type of conflict involving the Ontario Wolves: the war fought in North America at the end of the eighteenth century. That was a rather peculiar liberation war, since the English domination in America was different from the colonial rule the English had established in India, in Kenya or elsewhere. Here the "colonizers" belong to the same race as the "colonized", so this War of Independence is much more like a civil war fought in a blurred and ambiguous setting where the two opponents speak the same language and look the same physically. An atmosphere where, depending on how you are dressed, you can look as if you are on the other side, and where friends and enemies can be confused and double-dealers lord it. One should not forget that the English were the greatest colonizers in history by virtue of their efficiency, fighting skills and capacity to transfuse their civilization into faraway lands.

Against such an ambiguous background, therefore, an uprising is more likely to be carried out as guerrilla warfare than a real war: it will be a conflict composed of small partisan war actions, reprisals and sabotage. This war is fought from house to house, village by village, and the enemy often doesn't even have a face, as any friend might turn out to be an enemy, a traitor, a spy. The ambiguity of this war without trenches that doesn't conform to the conventional opposition of two standing armies enhances the suspense, the coups de théâtre, the masked enemy, betrayals, desertion, greed for personal benefit prevailing over the ideals of patriots. A world of deception, that leads naturally into the most enthralling themes of adventure.