The Redcoats, with their fiendish leaders (Colonel Sparrow and Major Stoddard), but also the cruel spies working for the English. 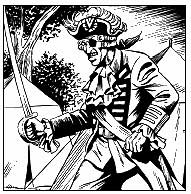 is introduced in the first adventures as the most cruel and merciless of the English officers, but later, in the long saga of the Ontario Wolves, we will meet much more wicked and above all more efficient characters. After all, Sparrow does not go beyond the programming of slaughter and destruction without ever succeeding in completing an action, as every plan masterminded by our Commander ends in wretched failure. He is called "The Hyena", even though he doesn't have much cause for laughter: his ambitions will be very soon frustrated by a bullet from Gufo Triste's rifle, which will switch off the smile on his bloody lips. Another central character fighting in the ranks of the Redcoats is skilful 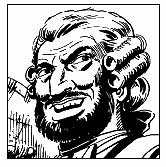 Major Stoddard, the protagonist of the story subdivided into several episodes entitled "La rivolta degli Uroni", and "Agli ordini di Washington". In this story Mark, disguised as a trader, has to cross enemy lines and reach a fort in dire straits fighting against the English soldiers and the Indian
tribe of the Urons, who are on a war footing and ready to set off a violent revolt. An important event in this story is the live appearance of George Washington, the future president of the newborn nation: this is one of the few real characters in the cartoon, which is otherwise not based on actual historical characters from the period. 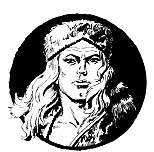 Another episode that really must be mentioned is the adventure entitled "L'alleato misterioso" where Mark and the Great Blek - the other famous patriot created by EsseGesse in 1954 - meet for the first time (thanks to favorable publishing circumstances). But the two characters are so engrossed in action that they exchange but a few words. Apart from the predominant theme of the struggle against the Redcoats, it would be a mistake not to mention the particular narrative style used in this collection, which has endowed this character with a rare (and enviable) malleability. The multiple narrative stylemes have allowed him to be involved in dozens of different plots, now steeped in horror atmospheres, now true detective stories, without mentioning the substantial contributions to Rider Haggard-like exotic adventure (or, as they say today, Indiana Jones-like). 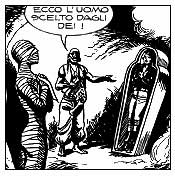 For example, the story divided into four albums (from number 52 to number 54 of the Tutto Mark series) is undoubtedly one of the oddest - and also most fascinating - stories ever published in Commander Mark's pages: Mister Bluff, Gufo Triste, Betty and Flok move from America to 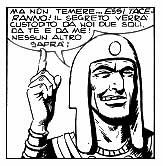 Africa in search of Mark, who has been kidnapped by no less than the mummy of a great Egyptian priest! This story is set in an unbelievable realm situated in the middle of the Black Continent, whose inhabitants preserve the customs and habits of ancient Egyptians and are dominated by a beautiful queen (who will easily fall in love with vigorous Mark). It is a rather unusual journey, but our heroes are not too upset by the change in the setting, and the adventure looks credible to the readers' eyes and perfectly in line with all the other episodes, even though - just for once - the Wolves' sworn enemies are not the Redcoats but the soldiers of the wicked General Imothep!