Everything you need to know about Mark

EsseGesse answers to your questions

BEING AVAILABLE FOR THIRTY-FOUR YEARS AT NEWS STANDS THROUGHOUT ITALY (AND MANY OTHER EUROPEAN COUNTRIES) IS A FABULOUS RECORD FOR A COMIC STRIP CHARACTER. BUT WHAT ARE THE MOTIVES THAT HAVE LED READERS TO BUY COMMANDER MARK ALBUMS OVER SUCH A PROLONGED PERIOD OF TIME?
In our view, the formula behind Mark's success is above all the apparent simplicity of the plot, the characters and their stories (which makes them very easy to read).
For example, if you leaf through these slim 64-page issues, your first impression is that there are several immediately noticeable main elements, characteristic of all adventure stories (including those belonging to the literary or cinematographic genre). We have a protagonist (Mark) and his friends ((Mister Bluff, Gufo Triste, Betty, the dog Flok), all clearly presented as the "goodies", and their opponents (the Redcoats), who are characterized (physically as well) as the "baddies" of the situation. Simple though it may be, this mechanism of clear-cut contraposition of roles does actually "work", it generates action in the story and enjoyment in the readers.

HOW AND WHY DID THIS INTREPID PATRIOT WITH THE BEAVER CAP REACH THE POINT OF INCARNATING THE HOPES OF AN ENTIRE NATION?
The an 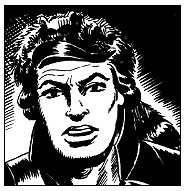 swer is to be found in nr. 100 of the original series, "Mark's Story", where there is a description of how a French cargo ship was shipwrecked at sea and only a boy and an old man were saved. Welcomed with brotherly friendship into a Native American tribe, the pair spend many years living with the tribe. The protagonist, who grows up bearing the name of Mark, is then given the nickname of "Wolf" after he saves young Betty from attack by a pack of wolves, a feat he achieves by killing all the wolves. Once he becomes an adult, he espouses the cause of the American rebels after the English have killed his adoptive father, who was also a patriot. On the latter occasion, our hero makes the acquaintance of the two friends who subsequently become his steadfast companions in all his adventures, namely Gufo Triste and Mister Bluff. Gradually a substantial group of settlers begins to cluster round this trio, forming a sort of small-scale army that becomes known as the Ontario Wolves and is eventually commanded by Mark himself.

ONE OF THE MOST AMUSING RECURRENT THEMES OF THE MARK ADVENTURES IS GUFO TRISTE'S TOTAL MISTRUST OF WOMEN. IS IT REALLY BELIEVABLE THAT IN SO MANY YEARS HE'S NEVER LET HIS HAIR DOWN A BIT?
There's only been once in over twenty years of honorable misogyny that Gufo Triste's heart has been touched so deeply that he was almost about to surrender to the fair sex. It was when, in nr. 129, he met Bedelia, a very determined black woman who managed to get a wedge into his gruff and mistrustful character. But although Gufo Triste was in love with Bedelia (or maybe precisely for this reason) he put an end to what could have been the great love story of his life, by running away in a manner that one might describe as "like an Englishman" if this weren't a terrible offence for the valiant Ontario Wolf, and by applying ante litteram the famous warning by Napoleon: "In love, the winner is the one who flees".

GUFO TRISTE HAS MADE FORT ONTARIO HIS FIXED ABODE, AND HE LIVES THERE IN THE COMPANY OF MARK AND HIS WOLVES. HOW DOES HE RELATE TO HIS ORIGINAL TRIBE?
The episode entitled "Lo stregone bianco" represents an important stage for the character Gufo Triste, who receives a mysterious message engraved in the bark of a tree and then abandons Fort Ontario without telling his friends where he is going. But Mark, Mister Bluff and Flok, who are worried about him, follow him and are eye witnesses to his kidnapping by a group of Redcoats, whose leader is an illusionist, a man capable of hypnotizing people and conjuring up terrifying visions out of nowhere. At the end, after Gufo Triste has been set free, the mystery of his kidnapping is clarified: the Indians of the Great Lakes have to elect their supreme chief, and Gufo Triste is the chosen one. Naturally the English are not in agreement with this, and they are going to try to murder him so that they can get Alce Pazza elected, a turncoat Indian who has thrown in his lot with the English… In the last panel of this fateful adventure, Gufo Triste is finally elected chief of the Grand Lakes Indians, who thus side with Mark and his Ontario Wolves in the struggle against the English oppressor. It is therefore evident that every now and then, between one adventure and another, our gruff Native American abandons the "palefaces" to return to his own "electors" in order to perform the duties he is called upon to fulfil by virtue of the prestige of his role.

COMMANDER MARK'S TWO ULTRA-FAITHFUL "PARDS" ARE PRESENT FROM THE VERY FIRST ISSUES ONWARDS. WHEN DOES FLOK APPEAR FOR THE FIRST TIME?
The "cast" of our bunch of heroes is completed on the occasion of the anniversary of the death of Gufo Triste's witch-doctor great-great-grandfather, in other words at the stage of the episode entitled "Mister Bluff". It is in this album that we finally meet the friendly and ravenously hungry dog that from this moment onwards becomes Mister Bluff's inseparable companion. The "old beard" saves Flok from the harassment of the English, but all he achieves is that the dog sticks to his heels right up to Fort Ontario, where the cur - little more than a bag of bones - gets to taste Gufo Triste's loins for the first time (the veritable "slapstick" scene of the series, which has now become a classic "gag" of Italian comic strips). 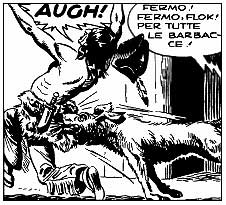 ALSO IN MARK SERIES , ESSEGESSE ALLOWED A NUMBER OF HUMOROUS ELEMENTS TO CREEP IN, BY VIRTUE OF THE PRESENCE OF MISTER BLUFF AND GUFO TRISTE. HOW CAN THIS CHOICE BE JUSTIFIED IN A COMIC STRIP THAT IS SUPPOSED TO BE PURE ADVENTURE? ISN'T THERE A RISK OF LETTING THE TENSION SLIP BECAUSE OF THE INTERMEZZOS THAT GIVE THE READER A FEW MOMENTS OF COMIC RELIEF?

Mark's friends evidently provide a "comic" foil to his firmness and concentration. But in actual fact, rather than being comical, the continual disputes between Mister Bluff and Gufo Triste (not to mention the actions carried out by that dog Flok) have something human, something familiar. They allow us readers to identify with the characters whose deeds and adventures we're following, showing them to us almost as if they were our "next-door neighbours", who are contending with everyday problems that are somehow similar to the difficulties all of us find ourselves facing day by day.

AMONG THE HUNDREDS OF STORIES THEY CREATED, WHICH ONES DID THE AUTHORS PREFER?
"The enigma of the three tombs" was mentioned by Dario Guzzon as being one of his really favorite stories. And in fact this dramatic episode, which includes a merciless "treasure hunt" to gain possession of the booty of an English officer, has many highly realistic touches, some of which are actually quite cruel. During a desperate battle, Mark and his companions are forced to abandon three of their fellow soldiers in the hands of the Redcoats, and the three soldiers are then shot. An old man, who is moved to pity by the sight of the corpses, buries the three brave Ontario Wolves. Much later, an English officer, who is being chased by some bandits, uses one of the tombs as a hiding-place for the booty he got his hands on during one of his sorties; subsequently he is captured by marauding pillagers and dies before revealing exactly where the treasure is hidden. But the criminals know the name that is on the tomb, and they also know that it's the tomb of one of the Ontario Wolves. So they send their leader, a woman, to Fort Ontario, where she passes herself off as the sister of one of the three fallen soldiers. But Mark sees through her treachery, and as the plot unfolds, the tragic treasure is finally found, although at the cost of many other lives. This is a less light-hearted adventure than some of the others, an adventure where the protagonists stand out as the only symbol of honesty in a world dominated by cynicism and greed. 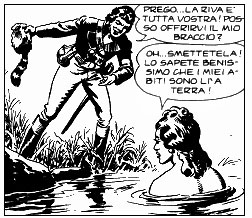 IN THE CLASSIC ADVENTURE COMIC STRIPS, THE ROLE OF WOMEN HAS ALWAYS BEEN MARGINAL. WHAT ATTITUDE DO MARK'S AUTHORS DISPLAY TOWARDS THE FEMALE FIGURES?
The life of the protagonists at Fort Ontario has something timeless, something that imbues it with a sense of being "beyond the confines of the world", on account of the serenity and regularity of the way life proceeds at the fort. Much of this atmosphere is certainly attributable to the character of Betty, the Commander's eternal fiancée, constantly busy fixing supper for the hero, but also willing to engage in action on his behalf in order to help him, and to "emancipate" herself from a role that in some cases seems to be too confining. But it should be pointed out that Betty is certainly not the only woman to figure in the series: the fair sex is definitely not unimportant in the Mark adventures. First of all, because our hero is by no means unmoved by female lures. And the innumerable women he meets in his various raids and incursions all seem to fall in love with the handsome young man at first sight. The fact is that on such occasions Mark by no means displays the attitude that would be considered fitting for a hero par excellence, who is expected to be faithful to his sweetheart and blind to the temptations of the flesh. The dashing Commander often responds passionately to the effusions of the winsome beauties, showing that he finds the experience enjoyable. Only the implacable and prompt intervention by zealous Betty spells doom for these dreams of love. And Mark, resignedly, bows to the jealousy and demands of his possessive partner, in a delightful alternation of playful ruses and ambiguity.