much is known about the mysterious past of the gallant adventurer called Mister Bluff: we know that he has been a sea-robber and that he seems to have had a wife once, a long time ago. Nobody knows his real name nor the reason why he is called Mister Bluff now. Destiny made him encounter Mark on a sad occasion, the hanging of Mark's adoptive father by the English after he had been a member of a combat-hardened group of patriots together with Mister Bluff. It was near the mortal remains of that just and upright man loved by both that the strong tie of friendship was established between them, and the two men made a tacit pact to continue the struggle against the English colonialists "until victory or death!" In spite of the sadness implicit in his name,

Sad Owl is a great fighter and a man of measured wisdom. Nonetheless, he's somewhat prone to pessimism, which can be inferred from the maxims and adages he frequently utters, quoting his great-great-grandfather who was a wizard and whom he constantly recalls with comic solemnity. The Native Americans respect him and so do the Ontario Wolves as well, while the Redcoats are afraid of him. Gufo Triste's prestige wavers only under the power of a bony and flea-ridden being, his dog Flok 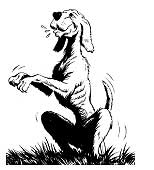 , whose main activity consists in trying to snap at his bottom. But what our friendly Indian wet blanket fears even more than his obnoxious four-paws is… women, whom he considers as the world's greatest misfortune and towards whom he directs a susbstantial portion of his great-great-grandfather's repertoire of citations. But another essential character of our cartoon lives within the stoutly fenced-off area of the impregnable "hideout" of the Wolves, i.e. inside the place called Ontario Fort that is situated on a small island defended by the waters of Lake Ontario: blond 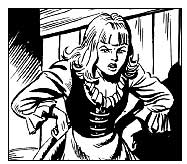 Betty, the victualer of the group and Mark's eternal fiancée. Month after month, for twenty-three years she's been fiercely defending her love-story with Mark against the attack of her many rivals in love, the passionate, sensual and seductive women who are always favourably disposed towards the handsome Commander. Betty, whosebehavior is unswervingly in harmony with her reserved look (long blond hair, absolutely simple clothes, a fresh and natural beauty),has played her cards by staking everything on her personality and cooking skills. And in the end she will make it and marry Mark, no trifling achievement in a world such as that of cartoons, where the heroes' girlfriends usually remain their fiancées forever! In the album called "Il corsaro" we meet for the first time another character of the series, El Gancho, a rough sea-man, who is also a brilliant fresh-water sailor, with a hook instead of his left hand. He's been a friend of Mister Bluff's for a long time and he is also a brave soldier who fights against the English.