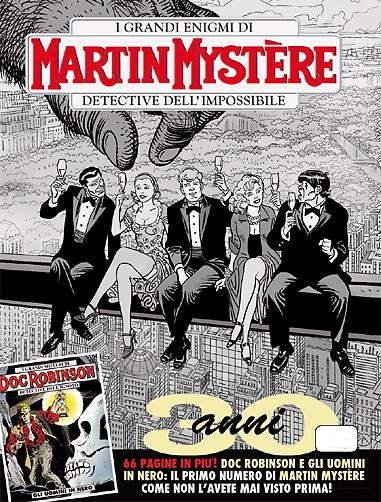 Introduction: A very special issue, with 66 extra pages, to celebrate the 30th year of the Detective of the Impossible!

30 years went by since the April of 1982, when, many years before X-Files and the Da Vinci Code, Martin Mystère began to investigate his “mysteries”, those puzzling enigmas that science isn’t able to explain. Good Old Uncle Marty – who, on the contrary of his author, does not appear a day older than before – celebrates this goal with an unforeseeable adventure — we won’t give you any clue about that not to ruin the surprise. And also, an historical 66-page comics story, whose hero – well-known to all of you – lives in a luxurious mansion in London and has “D. R.” as his initials. Who is this person? Mystero!