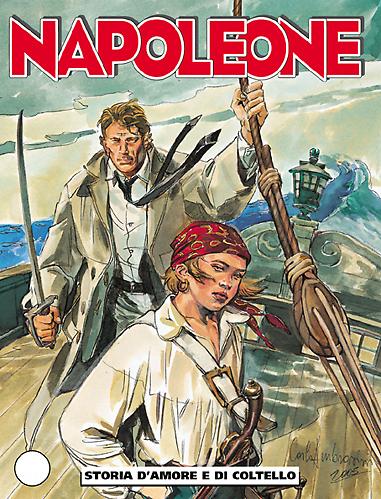 While she’s waiting for Napoleone to come and pick her up to take her to a fancy costume party, Allegra has an exciting romance about pirates to read: salty air, galleons out on high seas, the topsail yards turned into gallows… Upon their arrival at the party, Allegra and Nepoleone make the acquaintance of engaging Morena. Suddenly, though, the girl is assaulted by her former boyfriend who, pistol in hand, gives vent to furious jealousy. The Entomologist Detective manages to calm down the threatening situation, and as he comforts Morena, who is devastated by the unexpected scene of violence, he becomes aware that he is decidedly attracted by her charm and fascination… So Napoleone becomes a bit less attentive to Allegra, who, feeling neglected by her friend, plunges back into the book about pirates she was reading. In her mind, fact and fiction begin to get mixed up and the jealous ex-boyfriend turns into ruthless Captain Gordon Satan, Morena into his capricious lady friend who is fed up of a sailor’s life and is tempted by the atmosphere at court, whilst our hero is cast in the role of Laval, the faithful henchman of the ship’s captain…