The creators of Mark 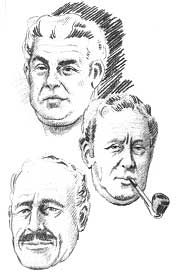 DARIO GUZZON and PIETRO SARTORIS were born in the same year (1926) in Turin, went to similar schools and obtained their diploma as primary school teachers. While Guzzon attended the Art School and then the Academy of Fine Arts, Sartoris started up his publishing activity that eventually took him to the Taurina publishing house. It is there that he met Guzzon, who was already publishing some of his cartoons in the magazine Piccina. When Taurina went bankrupt, the two men had already become close friends and passed to another publishing house, Edizioni Alpe, owned by Giuseppe Caregaro, where Guzzon designed some episodes of the strip "Cucciolo", while Sartoris edited the collection Tarman with a script by Amedeo Martini. Later on, at Torelli, they met the person who would become their soul mate in so many future cartoon adventures: GIOVANNI SINCHETTO, born in 1922 in Turin. Sinchetto made his début in the world of cartoons with the series entitled "Fulmine Mascherato" and then continued with "Carnera" published by Torelli.
The first co-operation between the three young authors from Turin gave life to "Kinowa" in 1950, a cartoon built on texts by Andrea Lavezzolo and published by the Dardo press owned by Gino Casarotti. The first character to be drawn and dramatized by the three authors, who by that time had started to sign themselves with the acronym EsseGesse, was published on July 1st 1951: the famous Capitan Miki. The protagonist of the story is a sixteen-year-old boy alone in the world, who becomes a friend of a funny drunkard called Double Rum and joins up with the Nevada Rangers. After carrying out a number of successful missions where he shows all his bravery and firmness, young Miki is promoted, in spite of his young age, to the rank of captain. Captain Miki also has his own young fiancée, Susy, the daughter of the fort commandant, and in addition to Double Rum - who reminds us of the classic old man of westerns (interpreted by Walter Brennan in many film versions) - he makes friends with another funny character, Doctor Salasso, graphically reminiscent of the actor Thomas Mitchell (can anyone forget the drunken Doc, the alcoholic, in "Stagecoach?"). These two characters gave the cartoon series a vein of comic relief, to counterbalance Miki's almost excessive maturity and conscientiousness. 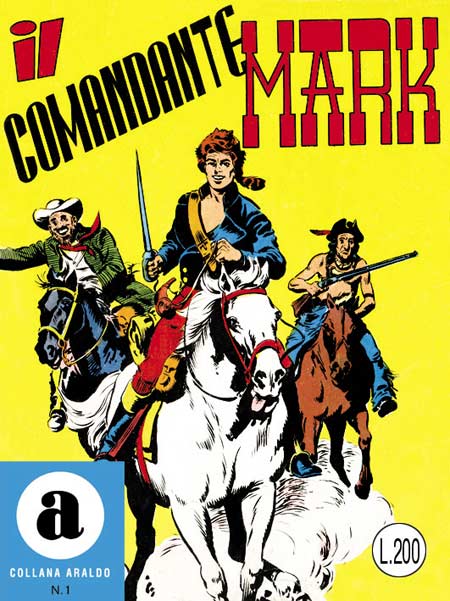 In 1953 EsseGesse had the first contacts with Tea Bonelli, the then wise guide of our Publishing House, and produced the art work for the "Cavaliere nero" dramatized from texts by Giovanni Luigi Bonelli. It was an album that recounted the adventures of Frisco Smith, a policeman serving for a western railway company. Dressed in a vaguely Mexican style, the hero of this serial is a skilful gunslinger usually assisted by a young Native American called Piccolo Corvo. "Il Grande Blek" was published on October 3rd 1954 by Casarotti: the story is set during the American Revolution and Blek is the leader of a group of trappers who fight against the cruel Redcoats, the symbol of colonialist oppression. Blek's faithful buddies in adventure are his stepson Roddy and the ingenious professor Occultis. Miki and Blek were both achieved enormous success and were created up until 1965, and would later be continued abroad with artwork by French illustrators. In 1965 there appeared "Alan Mistero", whose protagonist was a sturdy fiery red-haired hero capable of the most astonishing disguises and also a very skilful gunman, flanked in his adventures by two comic foils: the sophisticated Conte and the greedy Polpetta. This series originally appeared in a collection of weekly albums published by its own creators, but failed to achieve success and the series was soon after transferred by the three Turin authors to the publishing house Araldo, owned by Sergio Bonelli, which published it in the appendix of the Collana Araldo. And it was in September 1966 that Commander Mark was finally born. Once the regular January 1990 series was finished, the reprinting of the whole series Tutto Mark was published the very next month, and starting from the summer of that same year the Specials were also published, reaching their thirteenth annual publication by the summer of 2000. After Sartoris and Sinchetto passed on in 1989 and 1991 respectively, Guzzon was the only one left capable of designing and supervising the stories of Mark and his Ontario Wolves in Special Albums; so the baton was completely handed over to the illustrator Lina Buffolente, another doyen of Italian cartoons, mainly known for her contribution to the "Il piccolo Ranger" saga. The scripts were instead developed over the following years by Bonelli's new generation of authors, such Moreno Burattini and Luigi Mignacco and Michele Masiero. The passing away of Guzzon in May 2000 finally closed the long, fabulous and unforgettable adventure of glorious EsseGesse.