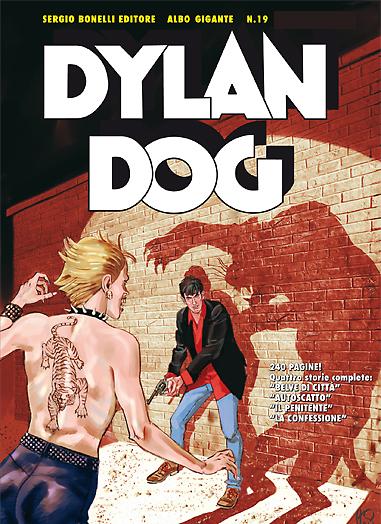 Introduction: The tiger begins to dream again, a snapshot... to another dimension, a terrible guilty feeling and Dylan Dog’s last words!

Seline, the girl Dylan saved from the tiger’s nightmares, is back in London to investigate about a shady traffic in arms. Inevitably, the city is struck by a new series of murders that the police ascribe to a wild beast. Dylan Dog will have to investigate about it, risking to find out truths he’d never wanted to know... Autoscatto
Plot and script: Giancarlo Marzano
Artwork: Piero Dall’Agnol

A simple photo shoot in a seemingly ordinary photo booth, takes the Nightmare Investigator in another London, where nothing is what it seems and running away seems impossible.

A man appears in Dylan’s nightmares, accusing him of a mysterious offence and inflicting him harsh tortures that leave wounds also when our hero awakens. To save himself from this persecution, that already brought other people to madness and death, the Old Boy needs to find out what he stands accused of. La confessione
Plot and script: Giovanni Gualdoni
Artwork: Daniela Vetro

What horrible thing happened to the dweller of Craven Road, to force him pointing a gun to his head to end it all? That’s what we’ll find out reading his last words, committed to a farewell letter that the Nightmare Investigator is writing before taking his own life...