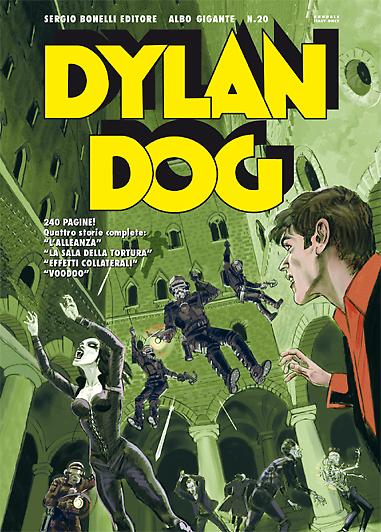 Introduction: A war between vampires and humans… a ruthless warden… a terrifying snowstorm… a custodian zombie…

In London, vampires are vanishing, kidnapped one after another by the members of a mysterious organization. To face this horrible threat, Rutger, Master of the Night and leader of the bloodsucking community, is unwillingly forced to ask Dylan Dog for help.

The Nightmare Investigator wakes up inside a disquieting dungeon full of weapons and torture instruments, together with a group of other unlucky prisoners. Nobody remembers how they got there, and the only way out seems to be to accept the blackmailing of their warden, that asks them to sacrify an innocent person.

While an unceasing storm is battering the United Kingdom, the fate of humanity seems to be frost in a comedy with non solution. In between dream and reality, only the dweller of Craven Road can hope to solve the thick plot designed by the devil.

The Old Boy goes back to school, at the Faculty of Medicine of a London college, where a zombie is killing both teachers and students. The real danger, though, is a different one, hidden behing the seemingly harmless face of a student.