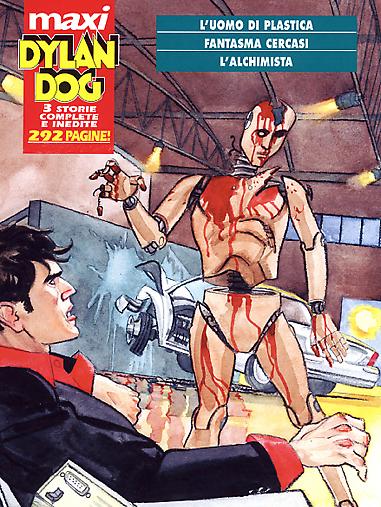 What would happen if the dummies used by automobile manufacturers for crash tests, i.e. for simulations of terrible road accidents, began to harbor a desire for revenge against their human torturers?

The specter of Lord Larkon has for years been the greatest tourist attraction of the village of Cromgail, as well as being its friendly protector. The problem is that the aristocratic ectoplasm has all of a sudden vanished into thin air, a disappearance that stirs up enormous consternation among the inhabitants of the small township. It’s up to Dylan to locate it …

The extremely precious jewels created by the legendary artist-goldsmith Dagobert Chain seem to drive whoever possesses them to commit suicide. As Dylan sees it, the only one who can unravel this lethal mystery is Chain himself. But there’s a problem… the sinister craftsman has for years been an inmate of Harlech psychiatric clinic …