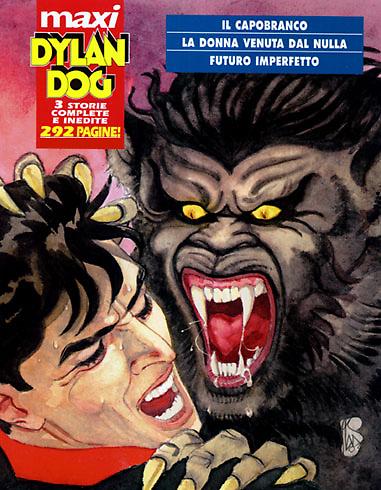 Introduction: An avenging Wolf, a Lady endowed with lethal charm, the Lord of Destiny… How many faces does Nightmare have?

A series of gruesome crimes is spreading mayhem and bloodshed in the hush-hush world of vicious dog fights. The victims suffer such deep wounds and such terrible mutilations as to raise the specter of the presence of a big bad wolf. And as so often happens to him, the Investigator of Nightmares finds himself feeling much sorrier for the so-called monster than for the victims, who are far from being innocent…

A bewitching dark lady gives several men a present: it’s a bracelet, and once you’ve fastened it round your wrist you can’t get it off again. In actual fact, that present is destined to drive whoever wears it towards the most horrible of deaths. Will Dylan Dog succeed in calling a halt to the obscure Artwork of the “Woman from nowhere”?

A strange character holds the power to influence the future irreversibly. A gift of this kind can make whoever possesses it truly Godlike… or like the Devil!