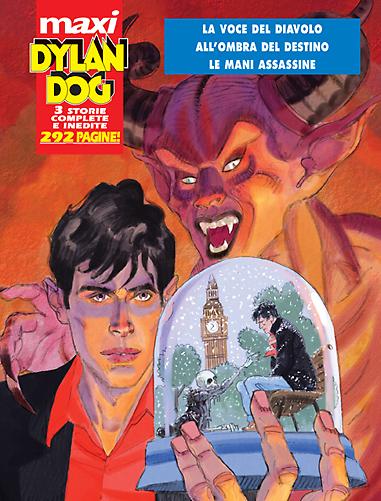 Introduction: The Devil, wicked trees and cut hands that come back to kill. This is the horror mix waiting for you in the fifth Maxi Dylan Dog!

There's nothing to comment, old Rustin is a real joker. Maybe a bit too self indulgent, but who would not be in his shoes? However his habit of sending to Scotland Yard tapes showing the tortures he inflicts on his victims might well write the word end to his brilliant career as a serial killer!

There is a tree in Charity's Nest park, a tree planted in 1911 by a woman everybody considered to be a witch. Now Charity's Nest  center for "difficult" kids hosts a descendant of the wicked teacher of arcane arts. and a mysterious assassin has started killing people visisting the park...

A wild night, rivers of alcohol and a crazy car race with friends. Then the crash, and one of the boys loses both hands. Hands that return to kill the people resopnsible for that incredible accident.