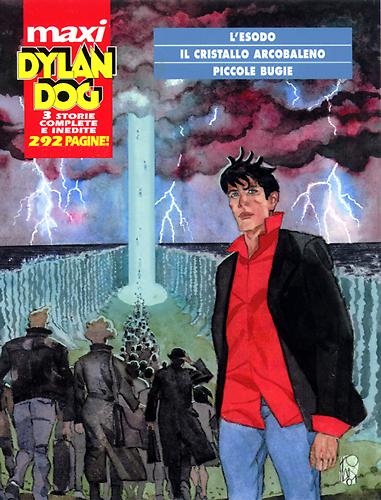 Introduction: Destiny calls, a bad luck crystal and a demon which feeds on lies!

There used to be a time when Al Jone was famous. Think about this: in most cases, a person struck by lightning simply limits himself to being charred to death, but not him: he’s turned into a sort of living accumulator, a scientific curiosity, a fairground freak. Now Al Jone has begun to be receptive not only to various forms of energy but also to the voices of the dead… and to others, which waft in from the depths of the constellations and are calling him. He has to go to the location selected for the meeting, but he’s not the only one to have received the “call”. Some of life’s flotsam and jetsam, the dregs of mankind, set out towards the same goal, and Dylan Dog marches alongside them, to protect them from someone who has no intention of allowing this Exodus to take place…

The millionaire William Woods, the official receiver Stella Jones, the artist Kean… they’ve all been persecuted by a cosmic misfortune ever since the moment they set hands on the crystal Arcobaleno. But if this stone is so lethal, why are throngs of Hindus hunting high and low for it? And what about the cynical detective Nash, who also seems to have been given the task of recovering the mysterious object – who is he working for? Naturally, it’s up to Dylan to shed light on the many “whys” of what seems to be a vintage noir…

It’s not nice to tell lies, and Judith is quite aware of this. But she can’t help it, and even when she was little she could never stop fibbing, despite her fear that Chainjaw, the demon who feeds on lies, might come one night and steal her soul. Childhood fantasies? Not necessarily. Judith has grown up now, and although she’s truly in love with Dylan, she still can’t help lying to him as well. The fact is that Chainjaw is back… And Judith’s lies begin to come true!