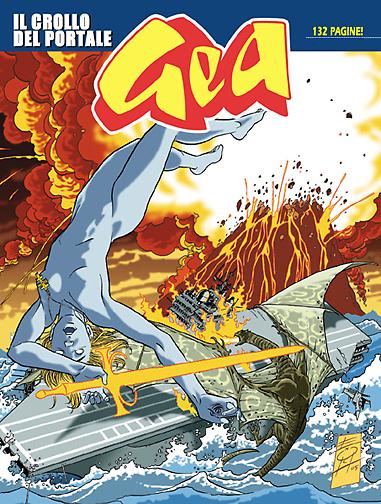 Introduction: Gea comes face to face with the Arconte, against the background of a war that seems to be leading mankind on a road of no return.

The Second Great War between the human race and its ancestral adversaries is just a stone's throw away. Nothing seems to be able to halt to the infinite stream of monsters that pour into our world through the Portal opened by the Arconte. Gea arrives in Antarctica, flying on the griffon-vulture, expressly to destroy the portal and put an end to this migration. But another character comes into play, one of the “sleeping” bulwarks, secreted in a very very powerful place: commander of a military aircraft carrier. This unexpected ally will do the utmost to destroy the threshold, even going as far as to use nuclear devices. Uncaring of who might get killed together with the enemies. Gea, meanwhile, finds herself once again coming face to face with the Arconte, and in this final meeting she relives the dramatic situation of when their ancestors met for the very first time…