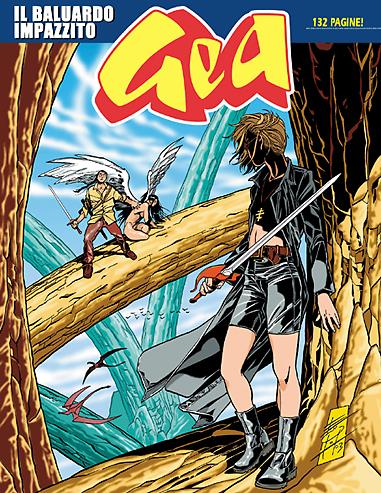 Introduction: The chase after the fugitive leads the patrol, and Gea too as shes on active service with this squad, way out into the fantastic world of Limbo, to the final dramatic climax

There exist no elderly Bulwarks, or hardly any: they usually die young, killed by some intruder, or else dementia sets in as a result of the emotional stress and brain damage they suffer because of their latent powers. When this happens, the subject must be eliminated as soon as possible. To prepare for this task, special teams of “eliminators” are trained. One of these teams has to be supplemented with Gea, for lack of hands. The team leader nurses an uncontainable hatred for any kind of intrusive typology, and in particular for the object of their hunt, a being that has gone demented through the effects of excessive stress and has begun to gather together a bunch of dimensional intruders in order to build up a personal cohort. In fact, the being in question has quite given up fighting against intrusive entities and has totally embraced the legacy of the Egregoros, with its message of universal brotherhood. In other words, the renegade is a sort of dangerous “deserter” and must be eliminated…