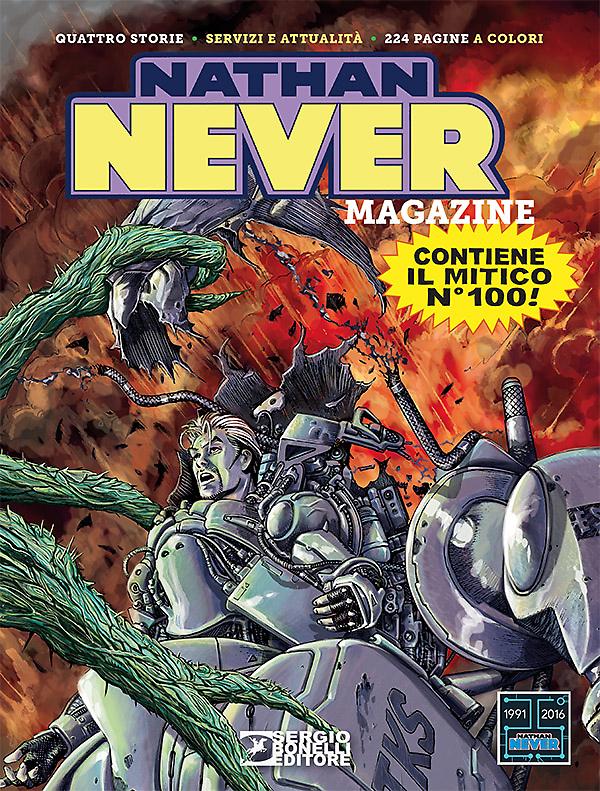 Let's take a trip into Science-fiction, wondering how much time is left until Apocalypse, roaming the Wild West beyond time and space boundaries, meeting the race of young rebels who fight dictators and realizing that the "gangster style" will never go out of date! All that and four complete, full-color stories — one of them is Nathan Never n. 100, to celebrate Special agent Alfa's 25th anniversary! !

While he's canvassing the North Town area, looking for one Mr Sheckley, Nathan finds Brown’s corpse. He then creeps into an underground cave and is swallowed up by a mysterious glowing Moebius strip. After escaping from the cave Nathan is involved in a car accident and when he comes round, he shows signs of a partial memory loss. Andy Havilland and Sigmund come along to help him recover it. But Ann and Laura Lorring also appear at the hospital... and Laura is supposed to be dead!

In the 1950s, the pilot known as Mister No takes Professor Never to visit the Amazon rainforest. They are both persuaded that the area should be protected, but different attitudes about this problem emerge. Centuries later, Nathan Never and a descendant of Mister No try to foil attacks from dangerous hackers, who have already caused the death of many visitors to the big tourist spot that hosts the area…

When a reporter visits Agenzia Alfa for an exclusive interview, he'll be so lucky: he'll meet the most grizzled and tough operative agent, a specialist in suicide missions and an unbeatable force in close combat. His name? Sigmund Baginov, who else?

Nathan goes back to the Margin on a mission, and once again meets Marlowe, the scout: he will have to escort a famous journalist, Wendy Carson. She's there to write a story about the notorious Pal Girl, a terrorist and leader of Green War, the army of environmentalist guerrillas who are waging a battle against big corporations… And above all, they fight against Ashton, the main responsible for global pollution!