My name is Leo Pulp

Who is Leo Pulp 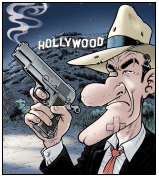 is a private investigator like the ones of the noir movies of the Forties, with their name written on the glass of their office door, the small waiting room with two small broken armchairs and the office always invaded by chaos, because the wage of a detective working for 25 bucks a day who wants to keep his moral integrity intact does not allow the luxury of a cleaning lady.
Leo Pulp is perfectly aligned to the PIs of that period: as tough as they come, as cynical as them, as romantic as them (but he would never confirm this, not even under torture), and, last but not least, as politically uncorrect as them or even more.
A real lone wolf, he fights his battle alone. The only one helping him is police captain Nick Tracy (but Leo keeps on calling him Dick), who does this only because he is compelled to by a not known old debt he owes to Leo.
Some help of a different kind is found in "curvy" Norma, the owner of a bar where Leo usually hangs out because there he can eat for free his favourite meal: bacon and fried eggs. Norma is Leo's almost-girlfriend but he, liking to think of himself as more cynical than he really is, is convinced he's seeing her only for his own self interest.
The playground of Leo's investigations is almost always Hollywood and the celluloid world, where he happens to meet the most famous divas of his time (whose seduction skills he always manages to resist), the most famous actors (by whom he is never impressed) and the most ferocious gangsters. His prominent chin upfront and his Browning in his hand, Leo is a hound nothing can stop: not the smile of a dark lady, not the noise of a machine gun. He goes forward on his way until even the most complex mistery is unveiled.