The creators of Leo Pulp

A short biography of Claudio Nizzi and Massimo Bonfatti

Nick Raider know that police stories are one of his creator's passions. But the stories that see Nick in action are too full of action and plot twist to leave space to a bit of sense of humor, even though Nick's partner Marvin Brown always lightens the mood with jokes and pranks. This time, with Leo Pulp, CLAUDIO NIZZI has finally managed to put together stories that rewrite the thriller/noir genre under an ironic and sometimes irresistibly comical light.
Widely known as a master of Italian strip cartoons, he was born in Setif (Algeria) in 1938. and started his script career on the pages of "Il Vittorioso", in 1963. After that, he experimented with almost every genre: from African adventures (with "Steve Damon") to sea voyages (with "Captain Erik"), from abridgements of the literary classics, "I promessi sposi", "L'isola misteriosa", "Un capitano di quindici anni" to westerns (his most popular strip before Nick Raider was a western, "Larry Yuma", a gunman whose gaze was constantly hidden under the brim of his cap), and even love stories and humorous strips. But, of course, detectives were bound to have a place in his career as well, and so you meet Lieutenant Mario or the funny Rosco & Sonny, the protagonists of adventures that are often more romances than detective stories. Thirty years ago or so, Nizzi started to alternate with Gianluigi Bonelli writing the scripts of Tex, a task he has taken on with great skill and mastery for many many years. In 1988 Nizzi created , the first detective story published by Sergio Bonelli, which he also supervised until 1992, when, due to the heavy commitment required for the writing of the Tex stories, Nizzi appointed Renato Queirolo as the supervisor of the series, while continuing to write stories for his new hero. 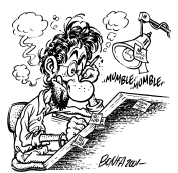 mastermind behind Leo Pulp is a cartoonist already well known in the italian humor comic book scenario: his name is MASSIMO BONFATTI, born in Modena in 1960, who learned the craft working in team with Guido Silvestri (Silver), Franco Bonvicini (Bonvi), Roberto Ghiddi and Claudio Onesti (Clod). Besides the creation of animation movies, merchandising, illustrations and cartoons (published on "Autosprint", "Guerin Sportivo", "Fumo di China", "Smemoranda"), Bonfatti has worked in the advertising business, painting world and photography, he has created a comic strip on Totò and illustrated stories, written by François Corteggiani and others, for the french magazine "Pif". In 1988, he gave birth, both for art and text, to a series completely of his own, titled "I girovaghi". But most of all he was widely known by comic book readers and critics alike, for penning stories and covers for "Cattivik" and "Lupo Alberto", and thru his collaboration to the satirical papers "Comix" and "Corrierino". "La scomparsa di Amanda Cross", "I delitti di Sunset Boulevard" and "Il caso della magnolia rossa" - colored by Cesare Buffagni and Alessandro Rossini - are the definitive confirmation of a grotesque and light hearted style, poetical and hyper realist (in "I delitti di Sunset Boulevard" reached also thanks to the prestigious cooperation with the inker Cesare Buffagni). The perfect choice to represent the peculiar atmosphere that permeates the pages of Leo Pulp.