The creator of Lilith 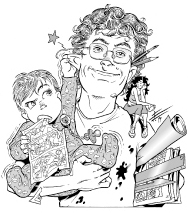 Born in Milan on June 12, 1962, after completing his studies Luca Enoch followed his life-long passion working as a free-lance graphic designer and illustrator both in the editorial and advertising field. In 1990 he took part in the annual contest held by the "International Congress of Comics and Fantasy" at Prato, winning the first prize with his story "Raptus". His professional début came in July of the following year on the "Fumo di China" 10, with the gloomy fantasy story "Eliah" for which he wrote a second episode, again for Fdc. His big breakthrough came in 1992 with the short story "Bersek" which came out in issue 6 of "Intrepido". Just a few months later he started the series "Sprayliz" for the same magazine. Right from its start in issue 14, it quickly became very popular with its readers, so much so that it had its own series, published by Star Comics, and winning the 1995 "Fumo di China Prize" for Best Character and Best Series. Later, still for "Intrepido", Enoch created the comic-strip "Skaters" which was to be taken up in the pages of"L'isola che non c'è", and the character of "Piotr, il porno coniglio" which has a second episode as yet unpublished. For "Action" he created the comic series "Ninjaboy". For Bonelli, he wrote and illustrated some "Legs Weaver" stories. June 1999 saw the début of his sixmonthly series with another terrible teenager as its main character – Gea, a fourteen-year-old girl, mad about rock and kendo who divides her life between school, rock sessions with her band and an ongoing battle with intruders from other time-space continuums. Gea's adventures came to an end in November 2007. Enoch's next project is called "Lilith", from the name of the chronoagent heroine of this six-monthly series, that will be at your newsagent's from November 21, 2008.