Everything you need to know about Lilith

Lilith is a young woman in her early twenties. She's a time killer – or chronoassassin – that is sent back in time to track some people down. Her targets are the unwitting carriers of an alien vegetable organism – the Triacanto, also known as “spiromorph”, “spinophorma” o “tricuspid” – that in a distant future will germinate and become the Earth's dominant species, forcing the few humans survived to extinction to an imprisoned life under the surface. The triacanto extraction inevitably means death for its carrier. Lilith’s only goal is to sever the ancestry lines of the Triacanto before it can branch out of control; she doesn’t care for the changes – even big ones – that take place in History after her actions.

WHERE DOES THE NAME OF THE MAIN CHARACTER COME FROM? AND WHY, AT FRIST, DO WE KNOW HER AS LYCA?
Lyca is the character’s true name and it comes from a poem by William Blake, “The Little Girl Lost”. It’s the story of the young Lyca, lost and wept by her parents, who is found asleep by wild animals that take care of her. The poem has some points in common with our Lilith’s early life: born and raised only to be sent in the past, lost to her parents and friend, she also has a tiger/panther-like animal as her companion. In my story, Lyca is a true soldier, trained for her mission from a very young age; once she commits her first bloody murder, she rejects her name and chooses to be called Lilith, an ancient female demon from the Jewish tradition, the name one of her victims called her. 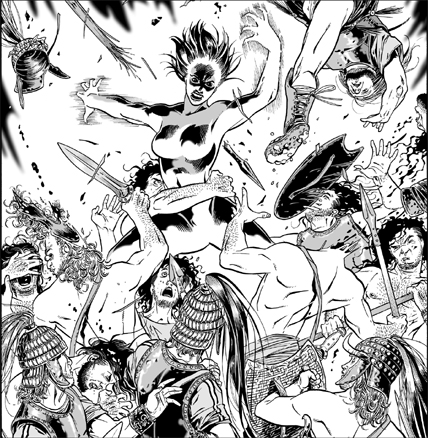 The Triacanto is an alien parasite that in a distant future will cause a planetary slaughter. It spreads in a chaotic and unrestrainable way, contaminating almost every single person on the planet. People will ignore its existence until the event called Grande Germinazione (“The Great Germination”) that will mark the end of human predominance on Earth.

WHO IS LO SCURO AND WHAT'S HIS TASK?
While going back and forth in time, as the first thing in each of her missions, Lilith has to find the Miriapodi to obtain the basic information for the mission. Once found and activated the miriapode, Lo Scuro appears to help Lilith with her task. Acting as a guide for the young girl, this big feline is incorporeal and invisible to everybody but Lilith. It doesn’t interact in any way with creatures other than her.

WHICH ARE THE PLACES AND TIMES WHERE YOU DECIDED TO SEND LILITH DURING HER TRAVELS?
Just like everybody else, I have my favorite periods in history – the most intriguing on an historical and iconographic plan. Lilith will crawl through the muddy trenches of World War I, will ride along the Souther rebels during the American Civil War, will sail with the Vikings explorers to the North American coast, will tread on the desert sand at the time of Napoleon’s campaign in Egypt, will fight side by side with the Italian troops sent to China during the Boxer Rebellion, and will face the gladiators in the Roman Coliseum. In her mission, Lilith will inevitably change the course of History as we know it and find herself in places where the historical background will be radically different.

IS THERE ANY CONNECTION BETWEEN LILITH'S WORLD AND THE WORLD OF GEA, YOUR PREVIOUS CREATION?
Maybe. But it won’t be obvious – no fantastic creatures or aliens from another plan of existence. Possibly, there will be a cameo by some supporting characters from the Gea series, like the Pesanti: Bluto could easily become one of the Roman gladiators or Thorwald one of the Greenland settlers traveling to Newfoundland, but this will just be a personal divertissement.