The world of Lilith

Earth has become uninhabitable, in a future in which mankind has no place on the planet's surface

There's just one future for the human race, and it's a future where humanity is doomed to extermination; the humankind will live a dire life in the bowels of the Earth, far away from the surface, where no son of Adam can set foot on without encountering the wrath of the Triacanto. For thousands of years the human beings had unwittingly carried this alien parasite called in many different ways: spiromorph, triunch, tricuspid, spinophorma, triffid, tridacna, trinacrio… Triacanto.
It

prospered inside us, spreading in hidden and ubiquitous ramifications, unbeknownst to everybody until the day of the Great Germination. 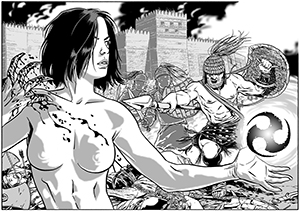 From that day on, man ceased being the lord of the Earth, the privileged creature placed on top of all the others by evolution – humanity was forced to leave its place to the new, aggressive and powerful master. But this future can be changed, by taking action in the past. One and only one chronoagent, a young woman born and raised to this purpose, is entrusted with the mission to save the humankind from the gloomy fate that's in store. Her name is Lyca, the “Little Girl Lost” sung by visionary poet William Blake.
She's the one that will have to race relentlessly back and forth through the space-time, to find the first carrier of the Triacanto and extract it from him before the parasite can irreparably spread. To do that, she will face a radical change; she'll have to leave aside any kind of piety and moral scruples – Lyca, the little girl lost, will become Lilith, the predator.