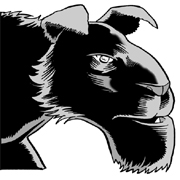 While going back and forth in time, the first thing in each of Lilith's missions is to find the Miriapodi – artificial creatures that contain the basic information for the mission (language, usages and customs of that era, identity of her target, and so on). Once found and activated the miriapode, a guide appears – Lo Scuro - to help Lilith with her task. Incorporeal and invisible to everyone but Lilith, Lo Scuro is a sort of a materialization – in animal form – of the information inside each miriapode; Lo Scuro can't interact with other living creatures, that aren't able to see him or to feel his presence.Lo Scuro carries Lilith, warns her about danger, has a sort of "intelligence" role, but he never can fight in the world where Lilith is. That is, unless she is attacked by her sworn enemies, I Cardi (“the Thistles”).

Sentient vegetable creatures, they're sent by the Triacanto; their only purpose is to stop Lilith from severing the ancestry of the spiromorphs. Cardi can move in time, but are unstable and can die in an unpredictable way, or can't stay in an era for a long time before suddenly disappearing. If they manage to establish their presence inside Lilith time plan, they are practically unbeatable – since they drag energy and sap from plants and earth. The only way to destroy them is by killing their carrier and annihilating the triacanto.

The Triacanto
The Triacanto is a timeless being. From a few "pure" ancestry lines, with no branching, it spreads in a chaotic and unrestrainable way, contaminating almost every single person on the planet. People will ignore its existence until the event called Grande Germinazione (“The Great Germination”) that will mark the end of human predominance on Earth. The Triacanto is timeless because it can spread in every era, regardless of the social and political environment. Changes in the course of History – even big ones – due to Lilith's actions, have no relevance for the Triacanto. It doesn't care if Rome is beaten by Carthage, if the Third Reich triumphs over the Allies or if the Ottomans conquer Vienna. The Triacanto would carry on spreading through its unwitting carriers until the Great Germination and the final disaster for humankind.
Lilith and Lo Scuro have just one goal – to sever the Triacanto ancestry lines before its branching. Nothing else matters.