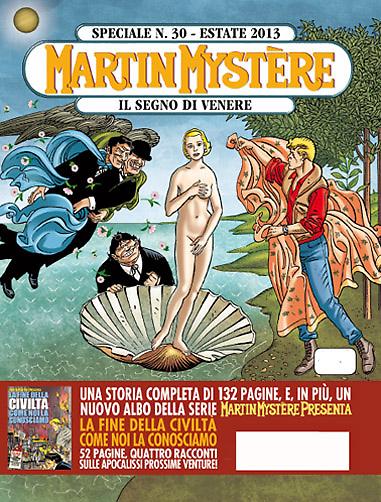 Introduction: A rare astronomical event has mysterious and ungovernable repercussions on our planet!

June, 1769: during an unusual astronomical event, the transit of Venus on the Sun, scientists all over the world are closely observing the sky to study the movement of the heavenly bodies. One of them is Benjamin Franklin who, as soon as he looks into his telescope, has a sudden shock and faints. July, 2013: commander Chris Tower suddenly disappears from the base of “Elsewhere”, leaving no trace; while the disappearance is kept under silence, Martin Mystère, stuck in a small town in New Jersey, realizes he cannot easily escape from there. It’s just the beginning: the Detective of the Impossible is amazed when he finds familiar faces in that place, though with an utterly different personality to them. There’s an Angie that doesn’t act like her, and a Dee and a Kelly that aren’t Dee and Kelly. Behind all these strange events, the same linking thread: the “sign of Venus”!