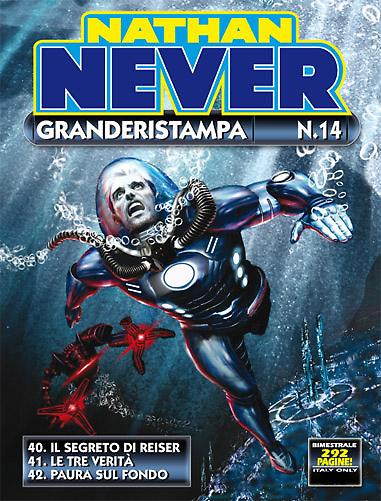 Introduction: A hot video recording, a hidden truth and an underwater mystery!

Edward Reiser is the present head of the Agenzia Alfa. Patricia Morales, an old flame of his, turns up at his house and gives him a disk which contains a film clip. But Patricia died twenty years ago during a rock concert in which she was the singer and Reiser the manager – the film shows her death… and Reiser seems to be her murderer! Very upset, the head of the Agency asks Nathan Never for help; the two set off towards the West Coast to try to shed some light on this strange business…

On the space laboratory Akutagawa an escape capsule is found with an occupant on board: Sonia Klowsky, the wife and assistant of Professor Yakuto, head of the laboratory scientific mission. The third member of the crew, Samuel Rhodes, is also found on the Akutagawa but there’s no trace of Professor Yakuto. Nathan is hired by the attorney Olivia Olling to throw some light on the case. For the version of the events told by the two survivors and a recording by Yakuto tell three different stories…

Marine Plant, a company which grows deep-sea algae, asks Agenzia Alfa to help locate some robots which have been deprived of the first law of robotics and could thus injure workers operating on the sea bed. Nathan, Jack O’Ryan and Sigmund are sent onto Sea One station to investigate, but they suspect that the algae cultivation is a cover for drugs-trafficking. Martin Douglas of Marine Plant finds out the agents' real intentions and plans a sabotage…