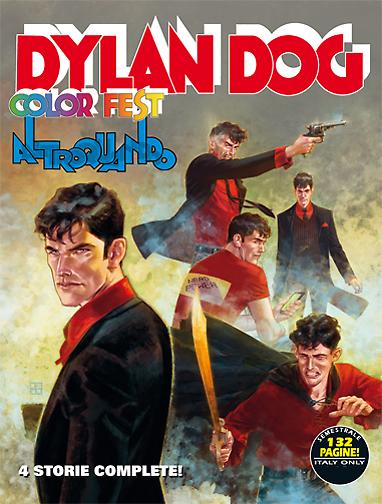 Introduction: Four steps in the Otherwhen for the Nightmare Investigator!

In a hypothetical and dark future, a tired and old Dylan Dog accepts a seemingly easy task: to eliminate a zombie that’s spreading terror on the streets of London. Things go the worst possible way and Groucho, bitten and infected, begins his slow trip to an eternal death!

A young and beautiful woman rings the bell at 7, Craven Road. She’s welcomed by Groucho, the assistant of the most famous investigator in London. It seems just like any other story of the Nightmare Investigator, if we weren’t at the end of the XIX century and our hero wouldn’t act like he had just come out of the pen of Sir Arthur Conan Doyle, the creator of Sherlock Holmes.

What if the young Dylan, who – as we know – was born in
1600, never came to our time but grew up with Xabaras as his father, in an isolated mansion in Scotland, surrounded by zombies as servants? That’s what we’ll find out in this stories, told firsthand by an unusual monster-hunter on the pages of his own diary.

33 years old, not studying or working, he still lives at his parents’ home, whom he’s always fighting with, and spends all his time on the Internet, reading splatter comics, collecting action figures, and knows all the plots and lines of his favorite TV series by heart. He even has a best friend, but she exploits him because she’s madly in love with another man. Who are we talking about? A perfect “nerd” called Dylan.