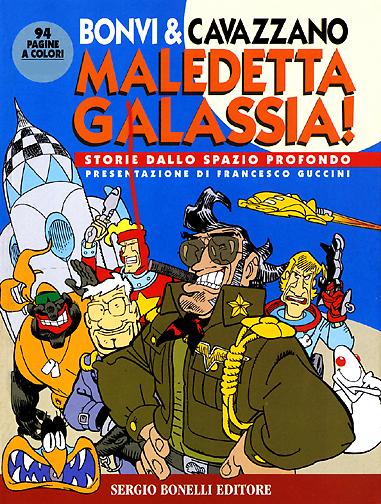 Introduction: Deep space horrors and the wonders of faraway planets, told in an ironic way, following the journeys of brave explorers and greedy conquerors.

What’s out there, in the unbounded sidereal space? Bonvi & Cavazzano will tell us, in three episodes that are conceived to entertain and to make us reflect as well… The heroes of these adventures in the stars are explorers, pirates, aliens and smugglers, but also monsters, impossible machines and ludicrous situations. It’s exactly when you travel through this "Maledetta Galassia!" (or “Bloody Galaxy!”), like the crew of the first tale, that you can discover a seemingly harmless planet, that is in fact a deadly trap! And an old alien machinery can look just as harmless, when is brought on board of their spaceship by the two space-trappers of the second episode: once again, though, nothing is what it seems to be... Still talking about aliens, here’s the third story, an original “encounter of the third kind” with a small and kind E.T. that’s unwillingly forced to face not-so-friendly space pirates.