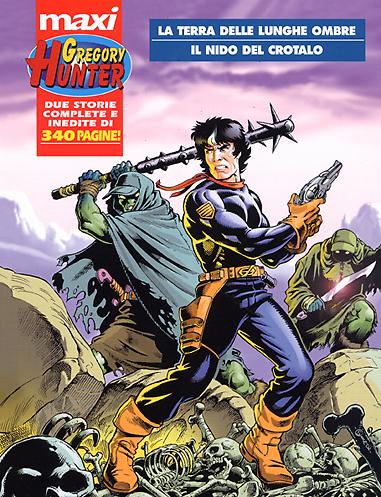 Introduction: The Space Ranger says goodbye to us with two adventures that will leave you gasping for breath!

Gregory Hunter and Badger say a definitive good-bye to us with a spectacular 340-page “maxi”, in which they acquaint us with new planets and new characters! In “La terra delle lunghe ombre”, Gregory has to try to find a resolution for a global conflict on Justice, a planet that always exposes the same side to its sun, and which therefore has one desert side and one covered with everlasting ice. In the second story, “Il nido del crotalo”, the Space Ranger has to contend with a dangerous reptilian-shaped criminal and with two brothers who are veritable fiends, and get him embroiled in an action-packed plot!