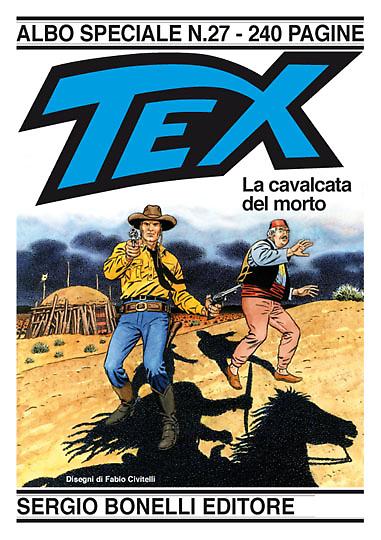 Introduction: A headless ghost's spreading terror in the Southwestern desert...

In the lonely nights around their campfires, cowboys tell some scary tales. One is the legend of Arturo Videla, the headless “comanchero” without peace, who’s roaming the prairies and deserts of the Southwest on his black stallion from Hell. But maybe there’s something true about this legend, because the ghost of the “hombre muerto” (dead man) began to kill. His first victim was one of the four Rangers who executed him more than 20 years ago. El Morisco believes that the morbid apparition is linked to the secret society of the “resurrectionists”, who steal corpses from the Mexican cemeteries, with the strange conviction they can bring them back to life. Tex and his pards’ come to Pilares to help their friend, and find themselves deep in a mystery. Who is the headless rider who appears preceded by the sinister sound of an Indian flute? How can he be seen at the same time in faraway places? And what’s the role of a young and charming comanche witch in this story?