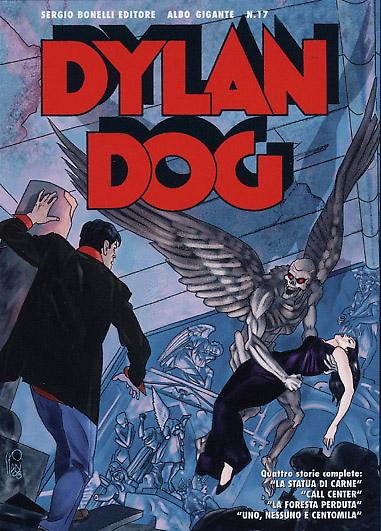 Introduction: A killing statue, a restless convalescence, a race of witch/amazon women and an unusual Dylan Dog who looks for his own identity…

In this world there's no regard for anyone anymore, not even for the dead. That's why, maybe, the statues of an old graveyard, tired of standing there and watching life go on, decided to step down from their stone pedestals and avenge those who can't have their vengeance anymore. At least, that's what Violet believes... and it was her who carved those statues!

Forced home by a plastered leg after a bad car crash, the dweller of Craven Road is pestered by the phone calls of a polite, but insistent girl, who's ready to try everything to sell him a pans set. It's a real persecution that will have unexpected and lethal consequences...

Lost in space and time, there’s a place where ancient myths and uncanny ancestral forces live. Following an exploring expedition, Dylan goes looking for the fabled land. He will soon find out the hard way that certain legendary creatures should be left alone, unless you want to provoke their anger.

Uno, nessuno e centomila
Plot and script: Giovanni Di Gregorio
Artwork: Fabio Celoni
A faceless murderer is spreading death among the young girl who have the misfortune to cross his path. And Dylan Dog’s girlfriend, too, falls prey of the blind rage of the mysterious serial killer. Going after the killer’s tracks, the Nightmare Investigator risks losing his own identity, becoming in turn victim, witness and… assassin!