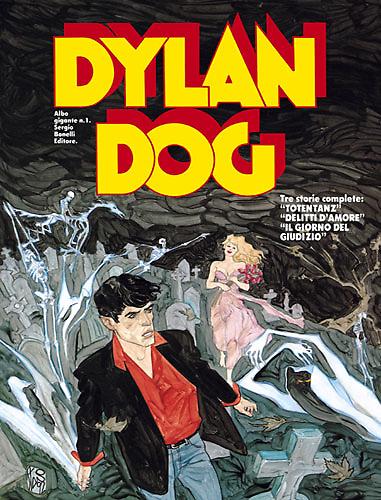 Halloween, dancing among the stones… Dylan Dog meets young Hope, the cemetery fairy and keeper of lost souls. Together with her, he finds the stories of the dead, their jilted loves and their hopes worn out by time, the tale of thousands of existences swallowed up by nothingness. This is indeed a magic night, a night in which ghosts become flesh and blood again and the living turn into ghosts…

The murderer and the detective, two figures that are pursuing each other, meet each other and merge. Dylan has recognized the monster’s hands, he has felt the monster’s icy breath on his own skin and he feels a savage rage swelling in his mind. Now he’s there, helpless before the muzzle of the revolver… Will he manage not to press the trigger?

An angel nose-dives and plummets to earth, downed by a missile. The dead come out of their tombs in search of someone to pass judgement on their sins; sudden monstrosities and attacks of homicidal folly. Has Judgment Day really come? No, it’s all too crazy, it seems like a farce projected by a dream, a kaleidoscope of macabre humor that is reminiscent of certain kinds of jokes, or involuntary… puns!