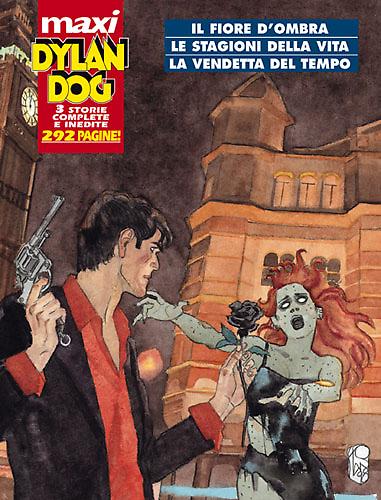 Introduction: A sinister flower power, the magic of Visvarupa and the secret of defying the passage of time!

Mr. Lefleur is a true professional of death, he always lays a flower on the tomb of his victims. Business is booming, and there’s never a recession in his line of work. But, between one murder and another, a strange trend is beginning to take shape. For such a celebrated killer it’s unfortunate if his “jobs” are strolling around like zombies! What’s going on? Perhaps those flowers…

This time it’s crucial to leave no stone unturned… How much truth is there in a simple idiomatic expression? You can get the answer from Rud Finney, who has discovered – despite himself – the secret powers of Visvarupa, the magic crystal. Within its light, there shines the mystery of the seasons of life and Rud has come into contact with it personally. Now his existence is split into four parts and it’s up to Dylan Dog to put the pieces together!

Stopping the hands of the clock… A fantasy that we can cherish in order to shoo away the nightmare of death. But if it isn’t possible to arrest time completely, why not dilate it a little? Doctor Okenower thinks he can do it, and to dominate the anxiety of his patients he wants to defy the great slayer: time itself. But its flow cannot be stemmed, because time is an relentless ocean, a cruel gentleman ready to claim his rights!