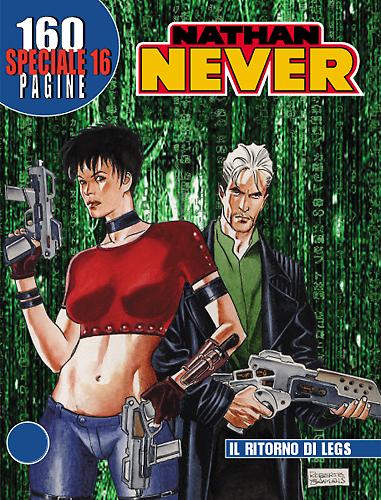 Introduction: Legs is back again, on a high risk mission: inside the UWART virtual reality simulation life is genuinely at stake!


Steve Corman, the son of a Security Council senator, connects up to a game called UWART (Ultima War Team). When he is found dead, still hooked up to his virtual reality armchair, his father asks Agenzia Alfa to look into the case. However, the contract that was drawn up between Alfa and the Security Council contains a clause that forbids this. So Solomon Darver comes up with the idea of handing the investigation over to "The Agency", the private agency created and headed up by Legs Weaver. Legs and her action unit, composed of the former pirate Orson Madoc, the psychic Janet Blaise and Katy, a young but brilliant hacker, have to get to grips with a really special mission, assisted by the unofficial support of Nathan Never and Nicole Bayeux. What they have to do, you see, is launch an inquiry both into the real and the virtual world...