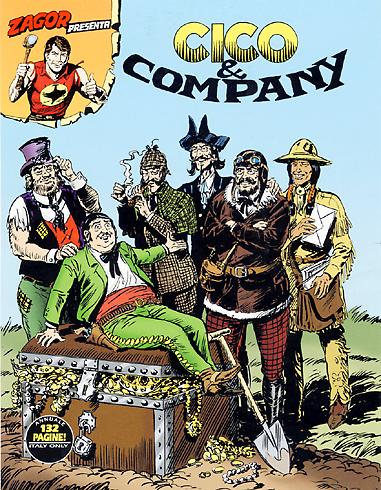 Introduction: This time Cico wont be causing mischief all alone, since hell be helped by six quaint friends!


Gathered together for the first time ever, six exhilarating friends of Cico’s will help the Mexican during his impossible mission throughout the most dangerous land of the Frontier: woods bristling with cruel Indians, mountains ridden by bandits, rivers full of scary whitewaters! Cico is joined by Trampy, the most sympathetic con man in all Northern America; Drunky Duck, Darkwood’s Indian postman; Digging Bill, the trasure seeker; Bat Batterton, the most improbable detective; Icaro La Plume, inclined to build strange flying machines; and Archimedes Zweinstein, the crazy inventor. If Cico alone is more than enough to cause a series of disasters, what will be the outcome of the combined group of six?