Who is Adam Wild?

Adam is a Scottish explorer who operates in Black Africa at the end of the XIX century. Though the British implemented the abolition of slavery in many African states, in the subequatorial areas of the Continent the slave trade, managed by the Arabs, is still going on towards the Middle East, as well as – in a different shape – towards the West, where the “human zoos” became increasingly more popular. 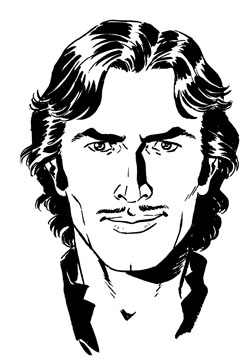 These (and others) are the wrongs that our Adam Wild fights against; his explorations become also a slave liberation effort, where he must take on the role of the freedom fighter.

What is Adam Wild’s look and who was taken as the model for the physical appearance of your character?

The first thing you notice about Adam Wild is the mustache. It’s a deliberate choice, that evokes a time where the cinematic adventure heroes always wore mustaches. Take Douglas Fairbanks, Errol Flynn or Clark Gable, for instance; they often played the role of the adventure heroes, free men who aren’t at anybody’s orders. Alessandro Nespolino was entrusted with the graphic characterization of Adam Wild, and he inserted these facial traits on a body that resembles a young Sean Connery.

"Adam Wild" can be labeled as an “historic series”?

The historical and geographical setting is very detailed. We will see crucial battles, like the Anglo-Zulu War or the Anglo-Boer War, but the series will also take many horror and fantasy “detours”. Just like in Magico Vento’s stories, the historical and anthropological basis for the adventure will be accurately real, but the forays into a fictional and adventurous realm will be a constant element in "Adam Wild".

Will the stories have a very strict continuity? Will it be a series with a structure composed by novel-like chapters, as in "Volto Nascosto" or "Shanghai Devil"?

In “Adam Wild”, the continuity is rather slack. It is there, of course, because of the numerous historical and chronological references that I had to put in the right order, following a logical schedule. But you’ll be able to read and enjoy each album in itself—the majority of the stories are self-concluded adventures, with a few double episodes scattered in the series.