The creator of Adam Wild

A short biography of Gianfranco Manfredi 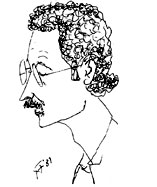 His debut in comics happened with "Gordon Link", a carefree ghost hunter that he created for the publisher Dardo in 1991. Since 1994, Manfredi collaborates with Sergio Bonelli Editore, writing for Dylan Dog and Nick Raider. In 1997, he authored the Western-themed series Magico Vento, where he mixed elements of the horror genre with a touch of Native American magic. In 2005 he debuted as a scriptwriter for Tex, with the story “La pista degli agguati”, published on the Maxi Tex of the same year. In 2007, it’s time for a new project for our publishing house: Volto Nascosto, an engrossing comics’ novel in 14 albums. In 2010 the sequel of Volto Nascosto, Shanghai Devil, was published as a mini-series in 18 episodes. In October 2014, the first issue of his new character, Adam Wild, is at the newsstands.