The world of Adam Wild

Who is Adam Wild

All the territories in the subequatorial areas of Africa: from Kenya to South Africa, including Congo and Nigeria. Adam roams Black Africa’s “classic” landscapes!

In the pages of Adam Wild, you’ll find Africa like it has never been shown before in a comic book. Our stories are set in the subequatorial areas of the continent: from Kenya to South Africa, including Congo and Nigeria. Adam roams Black Africa’s “classic” landscapes. 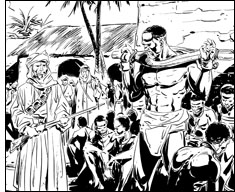 His adventure begins 20 years after the death of the famous explorer, David Livingstone, at the end of the XIX century. It’s a time when the geographical expeditions (like the historical search for the Nile’s sources) begin to be replaced by the anthropological research, aimed at studying the people. In many African countries, the British implemented the abolition of slavery and the post-Lincoln Americans followed suit; but the slave trade, managed by the Arabs, is still going on towards the Middle East, as well as – in a different shape – towards the West, where the “human zoos” are becoming more and more popular.

This is the trafficking that our Adam Wild takes action against, fighting the defacement of the age-old traditions and lifestyle of the natives, the deliberately provoked tribal wars, and the ruthless exploitation of the gold and diamond mines by the big Western companies.