► WHO IS LUKAS? HOW CAN HE BE DESCRIBED, IN A FEW WORDS?

He’s a Reawakened, a living dead who tries to oppose his tormenting hunger for human flesh, and a man who has no memories of his past. He even ignores his own name. And, above all, he doesn’t know that Wilda Belsen, the Reawakened evil leader, is looking for him… 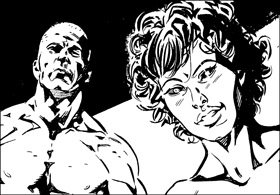 ► WHO ARE THE REAWAKENED?

They are creatures who, after death, came back to life with a hunger for human flesh. Unlike zombies, they can live a normal life and are able to control their hunger. They are gathered in a sect, whose leader, the Primus of the Board, is the hulking and wicked Wilda. The Reawakened purposely disseminate the virus of the reawakening, carefully choosing the people they’d like to join their aristocracy of returnees from the Other Side.

► WHAT KIND OF ADVENTURES WILL WE FIND IN THE SERIES?

Lukas could be called a “urban fantasy” series – with an urban setting and the presence of fantastic creatures –, though some classic tropes of the “Twilight Zone” narratives are told as a thriller story. Our take on storytelling doesn’t spare the readers from harsh themes and ambiguous, far from reassuring characters.

►WERE YOU INSPIRED BY SOMEONE IN PARTICULAR, IN PORTRAYING LUKAS’ FACE? 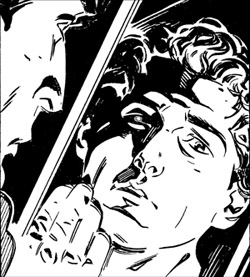 The starting point that Michele Medda had in mind was the face of actor , who starred, for instance, in Steven Spielberg’s “Munich”. Bana’s face was the initial reference, but several peculiar traits were added to make it work better on a comics page: Lukas’ strange hairstyle, for instance, with a “question mark” lock, or his slightly sticking-out ears.

Lukas is a mini-series, organized along two narrative arcs, each composed of 12 albums. The story is essentially divided in two “seasons”: at the end of the first we’ll lay the foundation for the second one, that in a way will be a real restart of the series.