The creators of Lukas

A short biography of Michele Medda and Michele Benevento 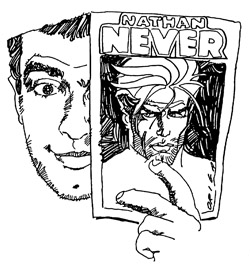 Born in Cagliari in 1962, Michele Medda now lives in Milan.
After his BA, he begins to write professionally full-time. In 1986 starts working for Editoriale Daim Press (soon to become Sergio Bonelli Editore) along with Antonio Serra and Bepi Vigna. The trio writes stories for Martin Mystère, Dylan Dog and Zona X, before creating in 1991, their own series, Nathan Never, followed by Legs Weaver in 1995. The adventures of Special Agent Alfa are published in several European countries, in the United States and in Brazil, granting its creators many prizes, such as the Yellow Kid Prize in 1997. On his own, Medda also writes scripts for Tex, Dylan Dog and Nick Raider. In 2000 he’s author of the series Digitus Dei (published by Peter Press) with art by Stefano Casini, and writes – together with Lucia Puxeddu – the web strip “Cani & Pesci”, with drawings by Bruno Olivieri. In 2004, Medda works for Walt Disney Italia, writing two albums for the series “Kylion” and “Monster Allergy”. He won two ANAFI Prizes (one with Serra and Vigna, and one on his own), and pairs his scriptwriting career with his activity in divulgation and critic. One of the founders of the Sardinian School of Comics in Cagliari, he also collaborated for many years with the cultural page of “La nuova Sardegna”, Sassari’s newspaper, writing about film and comics. In 2006 he works for a series for young readers, “Lys”, (published by Edizioni Rainbow), and writes – with Francesco Artibani – the mini-series “X-Campus” for Marvel/Panini Comics. In 2009 he creates Caravan, his new mini-series published by Sergio Bonelli Editore, for which he writes all the episodes. Currently he's working on the Lukas mini-series, which he co-created with Michele Benevento, hitting newstands in march 2014, and on an upcoming Nathan Never mini-series, illustrated by Germano Bonazzi. 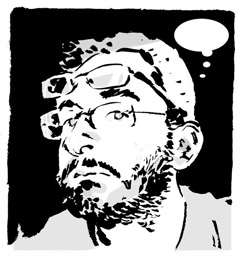 Born in Putignano in 1978, but raised in Gioia del Colle (BA). a degree in movies history and critics, in 2003  he works with Giuseppe Palumbo creating the backgrounds of the astorina specials on Eva Kant and Ginko. For Free Books, he draws a part of issue n. 1 of the series "L'insonne" (also inking Palumbo's pencils on the covers until issue 5). In 2006 he works on the IF Edizioni Nick Raider miniseries and, for the french market, on two volumes of the series "Gemelos" by Bamboo Èditions. Always for  IF Edizioni he creates several illustrations in appendix to "Il Comandante Mark". In novembre 2007 he completes a deck of tarot cards dedicated to Pirates for Lo Scarabeo, based on a Bepi Vigna script. 2008 sees him working for Soleil, on the series "Skyland", inspired by the same named animated series. He illustrates a short story , written by Piero Colaprico and Daniele Brolli, for a collection called "Cattivi Soggetti" published by Rizzoli. Since 2012 he is part of the teaching staff at the Scuola Internazionale di Comics in Reggio Emilia. In 2009 he starts working for Sergio Bonelli Editore, debuting in Michele Medda's Caravan miniseries. After illustrating an issue of Dampyr, he devotes himself to the Lukas miniseries, which he co-created with Michele Medda, hitting newstands in march 2014.