The world of Lukas

The big city is in the claws of cruel monsters, who came back from the dead with a hunger for human flesh!

In another time and place, there is a big city. Unbeknownst to its human residents, the megalopolis is the realm of the Reawakened, ruthless creatures who came back from the dead with a hunger for human flesh. 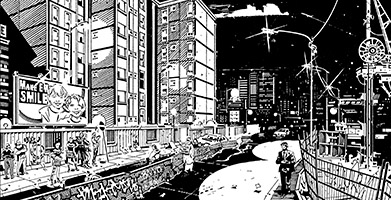 l them zombies. But zombies are killing automata, who follow only their primeval urge to eat. The Reawakened, in stead, can lead a normal life and control their hunger. They created a sect of their own, that offers its members exclusive restaurants, where human flesh is served, perfectly cooked.

The leader of the sect is the ruthless Wilda Belsen: 440 pounds of pure evil. She has the last word on every matter of (quasi-)life and death, because the virus of the “reawakening” cannot be passed on by chance. The Reawakened only infect the people who could have a useful role for their organization: politicians, managers, and even killers. But there are also people who deliberately chose to become a Reawakened, accepting a Faustian pact of sorts: their souls (their feelings and memories) for immortality!...