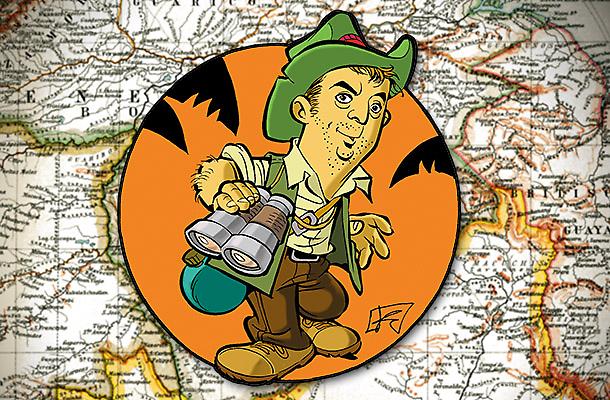 The funny mysteries of the “Green Hell”.

His name is Mister Bo and he’s looking to discover the secrets of an Amazonas full of a thousand funny surprises. Because, just like his creator, this inexperienced but eager traveller who Sergio Bonelli identified with, learned how to see the ironic side of life!

EVEN IN HIS MOST DRAMATIC STORIES, FOR ZAGOR AS WELL AS FOR MISTER NO, Guido Nolitta-Sergio Bonelli never broke a specific stylistic rule of his: "My proclaimed love for adventure notwithstanding, a love I nurtured by watching dozens of movies and reading hundreds of comics of this genre, and though I surely wanted to tell “serious” stories that oftentimes had me poring over many tomes, for my historical searches, I’ll admit one thing: I had a hard time in creating the plot, but it wasn’t an effort for me to set up the comic relief scenes that, in my opinion, should always take turns with the coups de théâtre and the violent action scenes. It’s not by chance, then, that beside my beloved Burt Lancaster, Stewart Granger, Gary Cooper and John Wayne, those carved in stone pillars of pure Adventure, I’d always revered also the great classic comics, like Charlie Chaplin, Oliver & Hardy and Buster Keaton, or their lesser imitators like the now-forgotten Larry Semon, Bob Hope and Abbott & Costello. All in all, since I haven’t got the vocation, the physique or the courage to be a hero, I’ve always felt that the funny side of life was closer to me than the epic side...", Sergio used to say.
That’s the origin of the many gags of Cico, the diminutive Mexican character – with an insatiable appetite and a natural talent for ending up in trouble – who has shared the reckless life of the Darkwood King for more than 50 years; but also the pleasurable and carefree digressions of Jerry Drake, who would like to spend more of his time smooching with a good-looking girl, drinking cachaça and napping on a hammock, instead of getting into the part of the Hero, that forces him to face, for the nth time, cynicism and violence.
NONE OF THE “NOLITTIAN” CHARACTERS TOOK THEIRSELVES TOO SERIOUSLY, and the same went for Bonelli himself, when he began sketching the funny and sometimes madcap misadventures of Mister Bo, on the pages of his travel journals. Later, the man who gave a definitive face to this exploring anti-hero was one of Sergio’s favorite artists, Fabio Celoni, in two pages that were originally published on the volume Mister No & Mister Nolitta (by Coniglio Editore, 2006), an overview of the multi-faceted universe of Jerry Drake and his creator’s.

Along with the text, the book had a large amount of photos: those pictures, as Bonelli wrote at that time, “weren’t taken from one of the many tomes packed in the editorial office’s library, but from my scrapbook, that I had always sparsely shown event to my closest friends. When you see me, either young or old, skinny or fat, fair-haired or grizzled, in a photo on board of a Amazonas boat or in front of a Mayan idol, I’d like you to think that I gave up my usual reservedness just to give you a sort of a guarantee about my stories. Something that could assure you that, besides the exactness of the drawings, Mister No’s author can also offer a personal guarantee to his tales".

Along with the huge series of photos and frames taken from his comics’ saga (some of them funny or romantic, reassuring or disquieting), Sergio chose to add the merry “countermelody” of Mister Bo. Behind that name, admittedly, "there is an self-mocking version of yours truly. Those pages really were born a long time ago, during my first trips to Amazonas, as a part of an ambitious project: to enrich the many “serious” and deep notes that I would use as the material for the adventures of my pilot, with some self-concluded short stories that could resemble in a certain way (with all due respect for their extraordinary authors) the strips of my beloved B. C., Wizard of Id, Crock and Lupo Alberto. The daily effect of being in a fast-growing region like Amazonas, with all the people who lived and traveled there, from the Indians to the city-dwellers, the cunning businessmen and the naïve tourists, allowed me to think that I wouldn’t lack ideas. After a few weeks, in fact, Mister Bo’s series could count on 20 pages, roughly sketched by me. As it’s often the case, though, when I read them a second time in my office, in Milan, far away from the charm of the Amazonic world, I felt induced to reject the entire bundle of sequences. It stayed inside one of my drawers for some 15-20 years...".

WHEN THE ABOVE-MENTIONED BOOK WAS PUBLISHED, THIS PROJECT, CONCEIVED BY SERGIO IN A FUN AND HUMOROUS SPIRIT, SAW THE LIGHT, through a talented cartoonist like Fabio Celoni—an artist who’s able to span from a realistic to a grotesque style, from tragedy to funny stories, as it can be seen in his work for Disney and for our Publishing House (on the pages of Dylan Dog, Brad Barron and Dampyr). That’s why, in 2004, Fabio was chosen to draw a caricatural version of Sergio Bonelli – a sort of a “reharsal” for Mister Bo – that was used as the "logo” for Atlante magico: a section from the old version of our website, that contained the twenty issues of its namesake column, orignally published at the end of the albums from the series “Tutto Mister No”.

"When they offered me this work", Celoni says, "I said ‘Yes’ but feared I wasn’t able to do it—I knew how much Sergio used to complain about the portraits he saw around. He usually objected that he was pictured with too big of a 'bazza' (the word he used for “chin”). And the character should also be an Indiana Jones lookalike of sorts, with the right garments, a Cambodian-jungle hat, a flask, the binoculars, etc. I think Sergio cut me some slack about the chin, since it was a humorous portrait, after all: he liked what I had drawn and approved it. Then, he proceeded to tell me something else: many years before, at the time when Mister No was born, he also created some pages of a script featuring ‘our’ Mister Bo; a few simple single-page comic stories, that he recently found in some drawer of his uncanny office.

"He showed me a couple of those pages, where he had rapidly sketched a funny layout, as usual, and told me that he had drawn them as a pastime, while he was in Manaus, Amazonas, 25 years before or so. Sergio was a self-mocking man, who loved humor, and I wasn’t surprised by those pages. I felt closer to him than ever. I couldn’t avoid picturing him, in his shirtsleeves, dressed like Mister Bo, while he swiped away mosquitoes with one hand, and wrote his scripts with the other, at the same time watching an anaconda who climbed the tree his hammock was fastened to, ready to grab his machete. From the things he had told me oftentimes (talking about our respective travels was one of our favorite pastimes), during those years Manaus was truly an incredible place, at the border of the world. It goes without saying that it was a great pleasure and a honor for me to draw those pages".

THE MELANCHOLIC SEQUENCE YOU CAN SEE AT THE END OF THIS PAGE, where Mister Bo leaves alone towards new incredible adventures, aiming for a faraway horizon after bidding farewell to his friends, was written and illustrated by Celoni in September 2012, a few days after Sergio Bonelli’s demise: it’s an affectionate and emotional tribute to a publisher, a storyteller and a man who taught us to live the Adventure – a real or an imaginary one – without rhetoric and prejudices, through the eyes of someone who, in spite of everything, still has the ability of feeling surprised by new things.