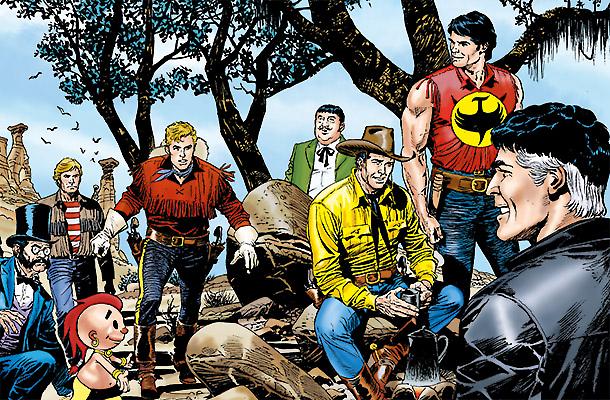 On September 26, 2011 Sergio Bonelli left us: after taking the helm of the Publishing House at a young age, from 1957 Sergio kept the company rolling on a steady pace, while at the same time taking a long journey – through his own stories, too – on all the routes of Adventure in comics.

This section of our website is dedicated to him, and will allow you, the readers, to know Bonelli as a man, as a publisher and as a comics’ writer. Here, you can find many stories and pictures about Bonelli’s career: the material comes from Almanacco dell'Avventura 2013, an issue published on the first anniversary of Sergio’s passing away. Now you can leaf through it here, in a complete and extended version.

In comparison with those contained in the above-mentioned Almanacco, for instance, the articles are enriched with new pictures and links to trailers, songs or albums mentioned in the text. Sergio’s biography has been integrated with new information and is now introduced by a short video-remembrance by Giancarlo Soldi.

If you want to discover all the stories written by Bonelli – "hiding" under the pen-name of Guido Nolitta – here you’ll find a "fumettography” with the list of all the albums created by Sergio during his long and prolific career as an author; also, the links to the presentation of the albums (when present) in the relative section of our website are included.

In the Bibliography section, you can also find all the essays and books about Bonelli and his work that have been published until now. You’ll also be able to read some rare self-concluded – and mainly humorous – comic pages. Still talking about drawings, you can’t miss the huge gallery of homages that many artists chose to create as a tribute to our publisher after his demise.

Leafing through the pages that form this section of www.sergiobonelli.it, you’ll discover the great number of passions that made the man and the publisher tick and often became the sources for his comic stories and series. Through our in-depth dossiers and many recollections by friends and collaborators, you’ll have the chance to know a little bit better a key figure for the Italian comics’ world and for us, the editorial staff of via Buonarroti. And, in our own small way, we – just like the authors of the features originally included in Almanacco dell'Avventura 2013 – want to dedicate to Sergio Bonelli our work and these pages.