Everything you need to know about Orfani

WHY IS YOUR SERIES CALLED "ORFANI" [Orphans]?

RR: It is “Orfani” as in “war orphans”. Our heroes are a group of children who miraculously survived the attack brought by an unknown and alien enemy against our planet. Now the Earth is doomed. And the kids will be trained to become superior soldiers and avenge the human race.

IN CREATING THE IMAGINARY SETTING WHERE THE 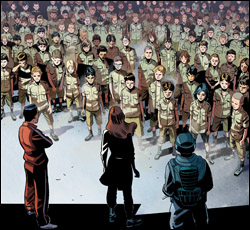 “ORFANI” STORIES ARE TAKING PLACE, WHAT WERE YOU INSPIRED BY? IS THERE ANY MOVIE, NOVEL, TV SERIES, VIDEOGAME OR COMIC SERIES YOU’RE INDEBTED TO?

EM: “Orfani” is the story we always wanted to read: inside “Orfani” you can find "Halo", as well as "Starship Troopers" (the book, not the movie), "Alien", "Metal Gear Solid" and all the visual imagery of the military sci-fi that we love. The references to comic books are very sparse, though one of our characters purposely wears a helmet that is a “quote” of Dave Stevens’ Rocketeer. 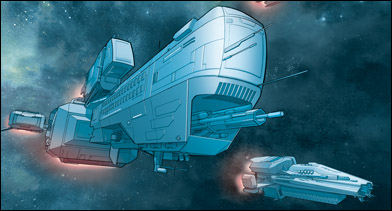 RR: Orfani is a series steeped into one of the science fiction sub-genres that I love the most: the military science fiction, with its antithetical spiritual fathers— Robert Heinlein and Joe Haldeman. Working on stories about young kids and with war as the main subject, I took my inspiration from books like "Stand By Me" and "The Long Walk", by Stephen King, "The Lord of the Flies", by William Golding, "Starship Troopers" and "The Forever War" (by the above mentioned Heinlein and Haldeman), as well as from movies like "The Big Red One", directed by Samuel Fuller, and Stanley Kubrick’s "Full Metal Jacket".

ORFANI” IS THE FIRST BONELLI SERIES SPECIFICALLY CONCEIVED TO BE PUBLISHED IN FULL COLOR. FOR A WRITER AND AN ARTIST, WHAT DOES IT MEAN TO CREATE A COMIC BOOK, ALREADY KNOWING THAT IT WILL BE PRINTED IN COLOR, INSTEAD OF OUR “TRADITIONAL” BLACK & WHITE?

RR: On the same level as the text and the drawings, color is hugely important, for its spectacularity but also for the emotions it can evoke. Since the approach and the care we gave to the use of color and its importance during the production of Orfani, I kept this in mind while I was writing the series, and tried to make the most of this opportunity.

EM: It means a lot! During the four years of preparation, at least one, I think, has been used to create our color. We didn’t want to copycat the American or French series, and we aimed to create somthing with its own personality. The color should be the right one for our story, for the format of the books and the kind of paper we use. We armed ourselves with a lot of patience and studied the best way to achieve this goal, asking a great team of colorists for help; starting from our “color bible”, they were able to give the pages the atmosphere and the spectacular look we were aiming for. 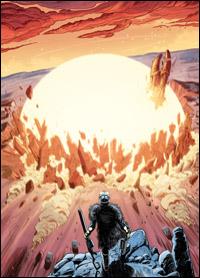 THE SERIES IS ORGANIZED ALONG TWO "SEASONS", MADE OF 12 ALBUMS EACH: DID YOU ARLEADY WRITE EVERYTHING IN ADVANCE, OR IS THERE STILL ROOM FOR IMPROVISATION?

RR: I always allow myself some space for improvisation. As a narrator, I kown that I’ll always try to surprise myself with some unexpected turns of events, while writing: that’s why I always try not to create too many restrictions before I start writing. Once the main structure and the heroes’ personality is determined, I really love seeing where the characters will take me. There are some fixed points, oblviously, but they’re fewer than what you’d think...