Everything you need to know about Cassidy 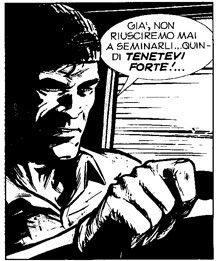 THE IDEA  FOR THIS NEW MINI-SERIES BORN?
I was a teenager in the 1970s, and I wanted to confront with a time and a setting that helped in forming my taste for adventure tales. After proposing the idea to Sergio Bonelli, and being approved, I went to the USA several times, taking lots of photos and trying to take in the atmosphere of the different "locations", from the small towns like Kingman, to the motels, the deserts, the busy streets of the big cities... I came back with a desire to tell this story, plunging once more – with my imagination, this time – in those sceneries and cities. Besides the settings, I took a great care about objects, clothes, weapons, cars and furniture.I wanted the reader to believe that the series was immersed in a world different than ours, and nothing gives this sense of reality more than exact details.

Obviously we should also mention TV series like “Starsky and Hutch” and, later, “Miami Vice”: these are maybe more “easy”, but still full of suggestions. On the books’ side, Cassidy has much in common with Parker, the thief and robber who has been the main character, in 1962-2006, in many hard-boiled books by Richard Stark (pen-name of the famous thriller writer Donald E. Westlake).

WILL THE 18 ISSUES OF THE MINI-SERIES BE LINKED BY A STRINGENT CONTINUITY, OR THE ADVENTURES ARE SELF-CONCLUSIVE AND ALMOST INTERCHANGEABLE?
Unlike Demian, Cassidy will have a very strict continuity. Our hero knows he only has 18 months left to live, though a part of him still doesn’t believe it. The idea was to follow him in his final months, as the reader will, to see where his long adventure will lead him. To work with these parameters – a stringent continuity, where the end of a story is the beginning of the following – has not been easy for me nor for the artists, but today I’m very, very pleased with the results. The last word, of course, is to the readers.

DOES OUR HERO HAVE A PHYSICAL RESEMBLANCE TO ANYBODY IN PARTICULAR?
More than an actor or an actual model, Alessandro Poli and I took an icon – the 1970s “tough guy” – as our reference. Cassidy could be Steve McQueen, or Clint Eastwood, or James Caan, also. If I had to choose a contemporary actor for his role in a hypothetical movie, I’d probably go with Daniel Craig, the last cinematic 007, or with Viggo Mortensen in “A History of violence”.

HOW DID YOU CHOOSE THE NAME FOR THE CHARACTER?
Cassidy, just like Demian, had for a long time a provisional “working name”. The definitive name was chosen among a short-list of proposals. It should be evocative, and I’d say that suggestions like those of Kerouac’s novels and the movie “Butch Cassidy”, among the others, practically made Cassidy the only allowable choice.