A corrupted US Senator, two dangerous bloodhounds from the FBI and a violent and ruthless gangleader

Malcolm Howlag, US Senator, is a powerful, but also wicked and crooked man. He married Dottie, Cassidy’s ex. Gnawed by the conflict between passion and ambition, he’s ready to try anything to prevent Cassidy to come back into his and his step-daughter Michelle’s life. He lives in a big mansion in L.A., with many well-armed security guards.
His interests are spreaded almost everywhere, in Southwestern USA. But the nature of his “business” isn’t always strictly legal...

r e Don Clayton
Both FBI agent, working as partners. Foster is young, honest and determined, while Clayton has a long career with the Bureau behind himself, accompanied by a good measure of cynicism. Though with their different ways, they both work toward the same goal: to catch Raymond Cassidy! 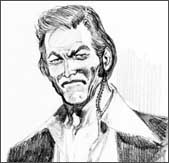 n "J.J." Jark
Violent and blood-thirsty robber, Jason “J.J.” Jark has a diametrically opposed guideline from Cassidy’s – he doesn’t hesitate to shoot on innocent bystanders, if they happen to be on his way. His gang is made of elements as ruthless as he is: Elmer Stout, Alvar Castillo and Archie Miller. Working with him was one of the biggest mistakes in Cassidy’s life...