A mysterious bluesman, a family to reconcile with and two trustworthy partners in crime

African-American, he’s old, with an indefinite age – he could be sixty, eighty or even a hundred years old! Under his snow-white hair, he always wears sunglasses to hide his blindness. He has a black jacket and a hat, and flaunts many earrings and necklaces; he never parts company with his ram-headed cane and his silver harmonica.He meets Cassidy when the thief is on the verge of death, and offers him a deal that could change his life, or what’s left of it...

Raymond’s ex-wife, Dottie, is a very attractive, fickle and sometimes cruel woman. After meeting Cassidy and marrying him at the end of the 1950s, she separated in 1962, when Ray went to Vietnam. After the end of his marriage with Cassidy, she married for the second time with US Senator Malcolm Howlag, a shady and questionable man, and forces her daughter Michelle to live under the same roof with them. For her ex-husband she still has mixed, love-hate feelings...

Michelle Cassidy
Nineteen years old Michelle took her beauty from here mother, but here decisive personality seems to come more from Cassidy’s side. The girl moves a silent war against Howlag, while still living in his house. She doesn’t want to desert her mother, though her hidden dream is to see her true father come back. No matter how much of a criminal Raymond Cassidy is, he surely is more honest than Senator Howlag. And he surely loves Michelle.

Eighteen years old Danny, who fled his home after his mother’s second marriage, lives a wild, disordered life. After committing some petty thefts, he joined a teenage gang. Determined to step in the tracks of his father, who’s a hero for him, Danny will get into troubles in no time... 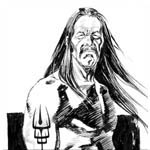 uan Cuervo
6-8, 225 pounds, full of tattoos and talisman necklaces — that’s at first sight Juan Cuervo, one of Cassidy’s most trusted partners. He’s a “lobo”, half Black and half Native, and lives in a small farm beyond the Mexican border with his family. He’s always ready to be on Cassidy’s side, either for a new “job”, or just to give his friend a helping hand. An expert safe burglar, he’s very skilled in using weapons and dynamite. 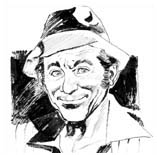 “Ace” Gibson
"Ace" is another of the oldest partners of Cassidy’s. Car thief and excellent driver, he’s also an inveterate gambler and a ladies’ man, with an inconstant but sympathetic personality. He’s the gang’s clown, always verbally skirmishing with Cuervo, but that doesn’t make him any less reliable.