AND HOW WAS VOLTO NASCOSTO CONCEIVED?
The series will be published after two years of hard work. It’s a project I was working on since some time ago. At first I was thinking about writing it as a novel, but then I decided that a graphic novel would be a more effective choice: the charming landscapes of Ethiopia and the great sceneries of the late-XIX century Rome, the epic battles... It all had such a great visual potential that it was a shame to waste it. Moreover, colonial period movies are nowadays too expensive to film, and only a few are still made.

WHY DID YOU CHOOSE TO PLACE THE SERIES AT THE END OF THE XIX CENTURY?
It’s an age that always fascinated me, in the American West (Magico Vento is now getting closer to that epoch), and in Italy as well. I already wrote two novels (“Magia Rossa” and “Il Piccolo Diavolo Nero”) that take place in late-XIX century Italy. But Africa has a particular charm for me: the father of my mother and my father, as well, spent many years there, during World War II. Though it wasn’t the same time and the same war, and though I’ 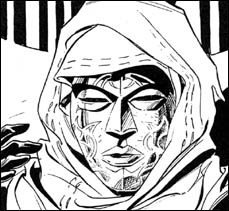 ve been to Africa just a couple of times (in Morocco and Kenya), I grew up immersed in this family history: my father was a painter, and when I was young he always painted pictures of Massawa and other African cities, the savannah, the animals, the elegant and proud faces of Ethiopian and Kenyan people. It all was bound to come up in my work, sooner or later.

THUMBING THROUGH THE FIRST EPISODES, WE HAVE NOTICED THAT THE SERIES – THOUGH NAMED AFTER A SINGLE CHARACTER – SEEMS TO BE A “CHORAL” STORY... IS THAT RIGHT?
There are four protagonists: Volto Nascosto is a warrior-prophet who wears a silver mask. Nobody knows exactly where he comes from and how he became the right-hand man of the Queen of Ethiopia, Taitù. Many contradicting stories go around, about him, his origins, and the meaning of his mask.
He’s a living legend of sorts and personifies the fascination for the unknown. Ugo Pastore is a young man from Rome, formerly employed in a commercial company. Ready to sacrifice everything for the people he care about, he embarks in a very risky thing: he will go to Ethiopia, to try and find one of his friend, an officer missing in action during the war. This officer is Vittorio De Cesari, a handsome nobleman, strong and daring. In Ugo’s eyes, Vittorio is the embodiment of everything he wants to be and isn’t... Vittorio is a hero, in one word. But, there’s a problem. Before going to Africa, Vittorio had a love affair with Matilde Sereni, charming and rich Roman lady, whom Ugo is secretly in love with, too. Bringing his friend back to Italy, Ugo will lose Matilde forever, and he knows it. On the other hand, Matilde is a fragile woman, with a traumatic past behind her, and the disappearance of her beloved Vittorio plunged her in an abyss of despair. Se could die, were Ugo not to bring Vittorio back. This is just a brief abstract of the plot, but the story is full of complex situations and unexpected turns of events, both in Africa and Rome. 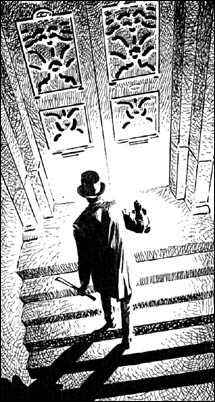 LET’S TALK ABOUT THE ARTISTS YOU AND RENATO QUEIROLO, WHO’S THE SERIES EDITOR WITH YOU, CHOSE FOR THE PROJECT... WHICH KIND OF DRAWINGS WERE YOU LOOKING FOR?
At first, we thought it better to look for artists from Rome, for the episodes that take place in the Capital, to have a certain amount of accuracy in the scenery. So we called Massimo Rotundo, who’s the author of two albums and all the covers.
For the African parts, we were lucky to find Ersin Burak, a great Turkish drawer, who knows very well the exotic landscapes and atmospheres – he worked on three episodes. Alessandro Nespolino was the artist in three albums, as well, and had the chance to work on the Ethiopian and Roman landscapes at the same time. We gave the task of drawing the first graphic studies for the characters to Goran Parlov, who’s also the author of the first episode. Then all the others came, with two guest-stars like Giovanni Freghieri and Roberto Diso. As for the other artists, Leomacs had already worked on Magico Vento, while Giuseppe Matteoni (who recently was the artist for the graphic novel “Dragonero”) and Gigi Simeoni (artist for Nathan Never series and writer-artist of the second Romanzo a Fumetti, “Gli occhi e il buio”), were working with me for the first time (and it’s been delightful to work with all of them!). All the artist did an extraordinarily good job. 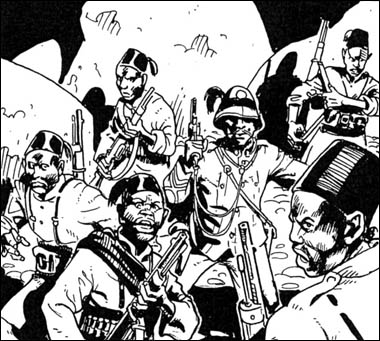 WHAT IS, IN YOUR OPINION, THE “AUDIENCE” OF VOLTO NASCOSTO? WHICH ELEMENTS COULD FASCINATE THE READERS THE MOST?
I chose as a motto for the series the well-known saying "Everything is allowed in war and love". I think this sums it up, more or less... but as with everything I write, in Volto Nascosto you’ll find hard-boiled atmospheres, murders, ghosts, revealing dreams and visions... I won’t cut nobody off, by choosing a particular “target”. It’s an all-around adventure, that deals with feelings as well (even the most destructive ones), with very human characters, for better or worse. The structure is that of the popular feuilleton, or the self- concluding TV serial, the kind you can’t avoid to watch until the end... And since there is an ending (in the 14th episode), our readers will feel an emotion that is not very usual in comics series: this TIME, also the main characters could die…