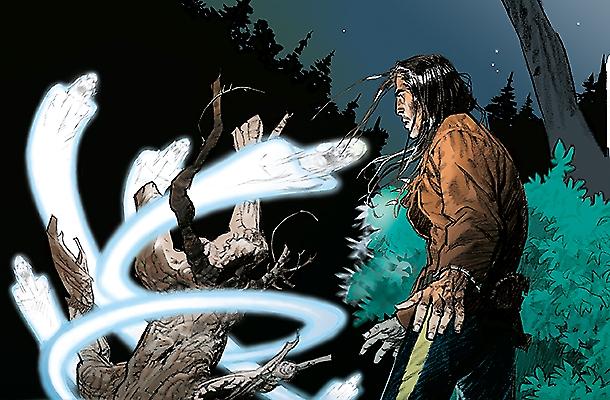 The world of Magico Vento

An unpredictable character, traveling towards the last Frontier, the one between reality and the unknown! 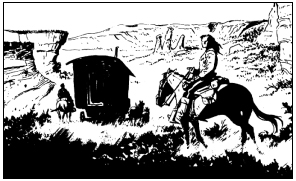 's series aims to describe the history and the legendary stories of the West without setting up a clear separation between the two. Each episode is based on very rigorous background documentation: the era, the costumes and typical settings, the circumstances and the historical figures that not infrequently put in an appearance in the stories (for instance Mad Horse, Red Cloud, General Custer) are all derived from careful historical research. The same is true for the ceremonies, rites and myths of the Indians as well as the religious and scientific beliefs, the illusions and superstitions of the white settlers. Magico Vento's Frontier is therefore not just a physical boundary between the lands that had already been explored and colonized versus those that were still unknown, but also a fine line between the harsh concrete reality of daily experience and the mysterious dreamlike realm of the imagination. In both of these dimensions, which often shade and blur into one another, anything can happen, and even events that have already been told over and over again to the point of becoming stale and hackneyed can appear in a new light. The cinema of Sam Peckinpah and Sergio Leone has made it perfectly clear that the old heroic West has gone forever; Magico Vento was created to cross one last final frontier, penetrating into that secret "Twilight Zone" where mirages and visions, nightmares and delusions are one and the same as reality.

The Magico Vento saga takes place in a scenario of the great prairies of Dakota, in the 1870s, i.e. in the period immediately following the War of Secession, when the transcontinental railway had only just been inaugurated, and when the Whites, in their relentless design of "civilizing" the West, were preparing to seize more land from the Indians. Gianfranco Manfredi, the inventor and script-writer of the series, gives the following illustration of the origins of this series: "The idea came into my mind a few years ago, as I reflected on the decline of the cinema genre of the "Western". Apart from sporadic episodes such as "Dances with Wolves" or "The Last of the Mohicans". I felt, and still feel, that anything about the West follows slavishly in the footsteps of Sergio Leone. So I began to wonder: "isn't there any other way to tell the story of the West?" Then I went back to the sources and I discovered what should have been obvious all along; namely, for the first Frontier writers, the West represented 'the boundary of reality'. The stories published in the Buffalo Bill serial are full of ghosts and supernatural manifestations, and even General Custer's memoirs depict the Great Plains as the reign of the unknown, a land of mirages and apparitions. It's here I found the basis to tell the story of the West by combining history and legend, and by exploiting a certain propensity I have for horror and magic."

Magico Vento stories are self-contained episodes, yet «in progress». As the character develops through the various episodes, he gradually discovers new things about himself and new ways of coping with situations. This means that the stories avoid the shortcoming of being repetitive, and therefore are not affected by the difficulty - all too often encountered in a serial - of presenting rounded characters. So even though readers will be able to enjoy the individual episodes without necessarily having to know all the background of the previous adventures, they will always find fascinating glimpses of possible future outcomes and will be left with a sense of curiosity about what might happen next to the protagonist.
The illustrators of the series, who were selected with the crucial assistance of Renato Queirolo, the editor, have put an enormous amount of effort into a graphic rendering of the innovative force of this kind of project, which constantly combines realism and imagination, Western-style adventure and horror. They have devoted very special attention to conveying in pictorial form all the subtle nuances of the story, the psychology of the characters and the fluidity of the actions. The graphic depiction of Magico Vento, his friend Poe and their enemy Number One, Howard Hogan, is the work of Bruno Ramella, under the guidance of Manfredi and Queirolo. The covers are designed by Andrea Venturi up to Nr. 31, after which they are by Pasquale Frisenda. The monthly episodes have featured artwork by José Ortiz, Giuseppe Barbati, Bruno Ramella, Corrado  Mastantuono, Pasquale Frisenda, Goran Parlov, Paolo Raffaelli, Sicomoro, Giez, Stefano Biglia, Ivo Milazzo, Luigi Piccatto and Corrado Roi. Each of them has added something precious to the character and the series, while respecting the continuity of the overall stylistic and narrative approach.