There are many eminent “guest stars” in the series, characters who were usually read in antithetical ways, beginning with …
General Custer, the most iconic character of the Wild West, alternatively presented as a hero or a madman. In Magico Vento, the portrait of Custer is full of light and shade, and the General is shown as a man full of contradictions, capable of being impulsively generous as well as irresponsible and reckless. 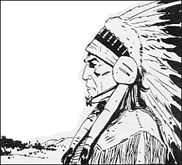 Red Cloud, the historical Sioux chief, the first who was able to unify and organize their tribes, and – a seldom-remembered fact – led them to a victorious war; the following peace was less fragile than we think, and could ensure the Natives a decade of relative freedom and self-rule.
Magico Vento greatly respects Red Cloud, and often argue for him in front of the jealous and slandering rumors about him spread by other Indians. At the same time, Magico Vento never truly becomes friends with him, due to his natural lack of inclination for the managing of power and the political tactics that go along with it. Sitting Bull, on the contrary, is a very popular chief, because he always respects his people’s disposition, even when it’s not attuned to his beliefs. His irrepressible optimism, though balanced by his strong will and resistance, sometimes takes him to underrate problems. Magico Vento will be particularly close to Sitting Bull, during his Canadian exile; while the old chief sees this event as a “new beginning” for his people, Ned knows immediately that it will be only a brief interlude.

Crazy Horse is the Native leader who Magico Vento is most in tune with: a “strange man” just like himself, an individualist who’s always ready to lead his people in battle, directly taking on the dangers and the most difficult decisions.

Wild Bill Hickok, the crepuscular character par excellence, is the heir and the last witness of a Wild West that’s increasingly disappearing, day by day, crushed by the so-called “civilization”. Ill, almost blind and disillusioned, Wild Bill still embodies a tough will of measuring up to his persona, who, for reasons beyond his control, became a matter of legend.