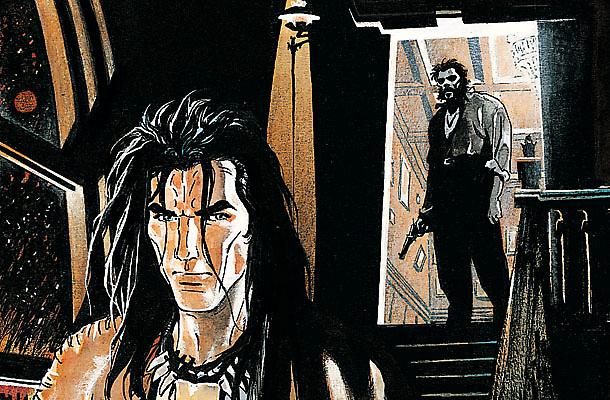 Lots of them, but none of them as treacherous and determined as the diabolical wheeler-dealer Howard Hogan! 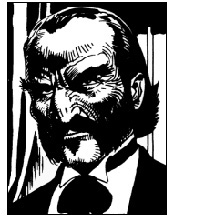 ward Hogan is a diabolical wheeler-dealer from Chicago, driven by a thirst for power and determined to provoke a new set of Indian wars in the name of a criminal idea of development that actually coincides with his own personal profit. Hogan is extremely well connected in Washington circles and media moguls. In public he likes to appear as a benefactor but in private he respects nothing and no-one, and is ruthlessly determined to sweep away all adversaries and competitors. He's protected by bodyguards recruited from among the most abominable delinquents he's so powerful that he can offer them impunity and an affluent lifestyle in return for absolute allegiance. Hogan is engaged in ruthless pursuit of Poe, who never misses an occasion to try to whip up public opinion up against him. But Hogan's real obsession is Magico Vento, an elusive enemy who, to Hogan's utmost annoyance, always manages to foil his cynical machinations, eliminating Hogan's accomplices one by one. When Hogan begins to sense a sort of strange and disturbing spiritual communion with his adversary (he has a flash of intuition through nightmares and hallucinations that his enemies are creeping up on him or are already in the vicinity), he doesn't hesitate to resort to necromancy in order to defeat them. At the very last moment, though, he holds back from carrying out his ultimate revenge because he senses what is concealed behind that psychic link with Magico Vento. Ned is, so it turns out, the natural son of Hogan, as he discovers during a dramatic journey into his family's past. The final showdown between the two takes place against the background of the blazing inferno of Chicago in flames and concludes with Hogan falling off his terrace and hurtling towards the ground. But the evil villain is not dead, and with the help of the powerful esoteric sect he belongs to, he prepares to stage a comeback. After a series of amazing and unexpected reversals, we find Hogan, who has now turned against the Volta Nera, fighting against the same enemies as Magico Vento. Naturally, it's just a temporary alliance, fuelled by the interest in - and desire for - revenge, but who can rule out that behind Hogan's moves there mightn't be an embryonic form of paternal concern? 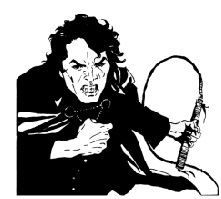 s is a witchdoctor in the service of the Black Vault, a sinister confraternity of powerful figures bound by a pact of complicity and a conspiracy of silence. But the Black Vault is not only a secret association motivated by unconfessable aims: it is also an esoteric organization which has no compunction about exploiting Aiwass's powers to call up evil spirits from hell, if this can help to achieve the organization's wicked aims. Later, upon the death of Kadosh, the supreme head of the obscure confraternity, Aiwass takes over Kadosh's position and assumes total control over the organization.
The Black Vault is a secret association whose members include some of the military top brass, a number of powerful politicians and other influential figures from the world of finance and industry. Its treacherous aims cannot be pursued in the light of day, and its affiliates are not allowed to know each other. An assembly composed of a select group of the dominant members, called the Centuria, holds a firm grip over the organs of governance of the Black Vault. The organization wields so much power that there is hardly a speculative move, political maneuver or military strategy that is not to some extent conditioned or affected by the Black Vault's scheming and plotting, and forced to bow to the interests of the men belonging to the organization.

a Snow appears on the scene for the first time in the service of the Volta Nera, when she is made available to Howard Hogan during rites performed to call up the Vultur and set it against Magico Vento. The sister of Wesley Snow, who heads the dreaded occult organization, Norma is a talented actress, which is why she is able to pass herself off as Magico Vento's wife, in compliance with a plan excogitated by her brother. The idea is that after marrying her when he was still Soldier Ned Ellis, Magico Vento is supposed to have erased even the memory of Norma together with the whole of his past. Or at least, that's the yarn they spin to him. But Norma is a problematic and contradictory kind of person and her obedience to the Volta Nera, at times extorted forcibly by violence, doesn't prevent her from feeling sincere affection for Ned, nor does it stop her from being somewhat disgusted at the deception and trickery she's forced to take part in.