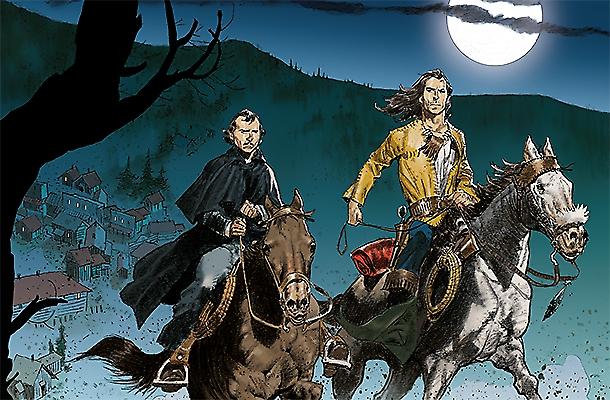 All the Native Americans, of course. And also, journalist Willy Richards, called Poe... 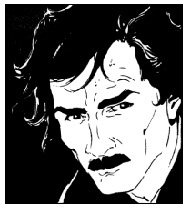 , called Poe because of his amazing resemblance to the famous writer, is Magico Vento's inseparable companion and friend. Persecuted for his courageous pieces of investigative journalism in which he uncovered all sorts of shady political deals, Poe has an anarchist's spirit - he detests oppressive power, he's an enemy of Washington lobbies, of unscrupulous wheeling and dealing in the world of big business and of the ruthless «civilization» of the Frontier carried out at the expense of the Indians. But he's also a man accustomed to city life, ill at ease out in the prairies, and he has been forced to become a man of action more or less despite himself. Indian customs often leave him feeling perplexed. He has a natural inclination to be distrustful of the supernatural, partly because he is afraid of it: in the past he was an alcoholic and it cost him an enormous amount of effort to get rid of the delirium caused by whisky. He regards himself as a no-nonsense kind of person, and he's always tried to find rational answers even to the most incredible events. But, although he's unwilling to admit it, Poe is above all a man of strong emotions, unable to separate judgments from affections, and it's this that makes him particularly attractive.

Cavallo Zoppo is Magico Vento's mentor. He is killed by Louis Beaumont, a Confederate officer who practises voodoo, but he still continues to accompany Magico Vento as a Spirit Guide; whenever particularly difficult circumstances require his presence, Lame Horse appears and offers advice.

daughter of Coda-di-Toro, the head of the tribe that gave shelter to Ned, Rifiuta-di-Smettere is a girl who's full of life, stubborn and proud, sexually liberated, with no intention at all of getting married, much too wrapped up in defending her freedom to want to get really involved with a man. Rebellious and defiant by temperament, Rifiuta-di-Smettere is bound to Magico Vento by a love that has never been openly declared, although often and eagerly put into practice.

r is an extraordinarily talented actor who falls victim to a terrible instance of matrimonial revenge. Tired of his never-ending string of affairs with other women, his wife throws vitriol at his face during a performance, and he suffers terrible burns. Dick strangles her on the spot right in front of the horrified audience, thereby condemning himself to being constantly on the run from his past and to a life of loneliness. Carr's extraordinary ability to disguise himself and act out parts enables him to assume any identity he wishes, and that's why, when we see him return to action, we find him with the scowling features of Howard Hogan, and then as Hogan's «lieutenant», Herbert. But this is not all: as he has a rather complex personality, Dick Carr gradually shifts from an attitude of egoistical vengefulness, which had led him to become one of Hogan's henchmen, to a front line commitment against the latter's crooked dealings. At first Carr's U-turn is due to the fact that Magico Vento has managed to gain control over his mind, but then, once his testimony before the Federal Inquiry offers him the opportunity for a new life serving the law, he fights courageously alongside Ned and Poe with the new identity of Henry Task.

Boris the Great, are the agents who works in tandem with Henry Task. Very trusted the first and very ambigous the second. Little Boy is one of Senator Fulton's most trusted men, as well as being a first-class investigator, but,  disgusted by the many conspirations happening inside the secret services he chooses to go work for Allan Pinkerton, becoming the first black investigator of his agency. For Ned and Poe he's a truly precious ally, especially when they're faced with the need to shed light on the tangle of mysteries smoldering in the corridors of power in Washington. Boris the Great moves away from the secret services to follow his own personal interests: Boris is an ex-illusionist that used his abilities to trick fools into giving him money. Intrigues capture him but he is not willing to risk too much for the government because in the end he is only interested in his own profit